You sit there pickin your nose, yeah i see you, but do you. see you?
because you see what you are picking
is the future, you're knuckle-deep in it.
diggin for gold, the gold standard, standard ops.
obsolete ops.
your gold standard man it's not gold for long.
pick brains not noses.

Now that the afterglow of our 100th post is finally in its death throes, we here at The Korner can focus our attention on other kreative endeavors. Namely, a much awaited kartoon from our own Hadley Daughterson. Not only is her work just really goddamn good art, it contains sundry profound messages as well. You wouldn't put that past us now, would you? Mull: 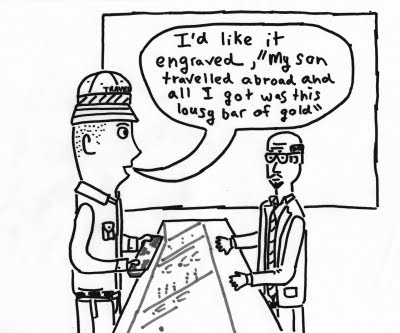 Posted by The Kreation Korner at 3:06 AM No comments:

Alright, so we've been waiting on this little shit Percy Stankowski for three goddamn weeks now. In the spirit of our 100th post, he claimed to be working on a celebratory interpretive video especially for the Korner. And for weeks, we waited. We put off other potential posts in the hopes that little Mr. Filmmaker would come through. And guess what? He didn't. So, after several non-alcoholic mudslides, I have figured out a solution to fill the empty void left by this director's-chair-having, beret-wearing, film-school shitbird: we post the shooting script. Use your imagination, folks, and bring the story to life for yourselves!

A man stands with hat in hand, peering into it. He methodically shoves his foot through its top and sets it on fire. The man's voice is high and grating.


MAN
This hat never had no corners. But look at it now. May the circle be unbroken.


The man shuffles hurriedly to the side, and a young girl in a flowery dress takes center stage, jump-roping expertly. The man shouts at her earnestly.

The girls stops her jump-roping and takes a bow.


MAN
Thank you, dear. (To the audience) So now you see what we are up against. Shine your copper pennies, good denizens. The time is nearly upon us.

FADE OUT
Posted by The Kreation Korner at 12:30 PM No comments: