My chest hurts
It's probably the aspartame
I'm pulling my own ass along behind me
We're going for something better!
But will I care any more after this whole debacle?
Will I care anymore?
What's the point?
This is a good and fine dental-hygiene freeschool
But worth it?

-Tum Cruz
Posted by The Kreation Korner at 5:32 PM No comments: 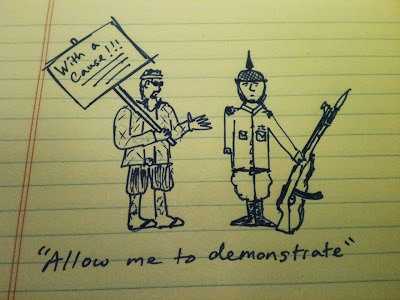 What an extended bizarre trek has transpired!

What do you get when you put 15 kreationists in the middle of the New Mexico desert with no sense of direction? A twelve day misadventure of bummer proportions, that's what! Here's some context: we embarked September 12 on a pilgrimage to the former site of Cityville, birthplace of Chris Peebles. Our goal: to kommemorate the fourth anniversary of The Kreation Korner. But far be it from our staff to observe the milestone modestly, we were all pretty fouled up before the chartered party-bus even left the HQ's parking lot. Turns out old habits die in a prolonged fashion akin to Rasputin. Despite our good intentions to engage in a larger-than-life celebratory ekscursion to match the momentous occasion, the mission was doomed from Jump Street (that's where we stopped in Winnemucca for a pit stop). Long story short, we must have used our maps as rolling papers somewhere in the Bonneville Salt Flats. Plus, once we finally arrived at our destination, our guide whom GRECH personally vouched for and even claimed owed her a favor was nowhere to be found, having apparently absconded with the money we faxed him. But the harsh reality that we were deep in the heart of a bone-dry, mysterious wasteland didn't dampen our spirits. Not at first. But once our provisions of Doe Farms hardboiled organic eggs ran out and the bus buzz wore off, our morale waned -- the guiding light of the Kreative spirit seemed to have faded. Luckily, maljohn managed to dig up some peyote which kept us occupied for several days. How we staved off hunger for the remainder of the arid tribulation we'll never now, though it might have had something to do with those strange berries we found. Finally, early yesterday we stumbled upon a delirious one-armed hiker who guided us back to civilization, in exchange for our Pentax K1000. We almost didn't accept the offer, but who needs photographic evidence of such incidents when you have eye witnesses? In the end, we learned an important lesson. In our luxurious group quarters here in Boise we take life for granted. All the spoils of modern life could be snatched away in an instant, forcing a reversion to survival mode. At least now we'll be prepared when that day comes. For now, though, we'll work through the lingering sun-stroke, dehydration and gastric woes to get back to the business we set out to celebrate in the first place.
Posted by The Kreation Korner at 10:17 PM No comments: