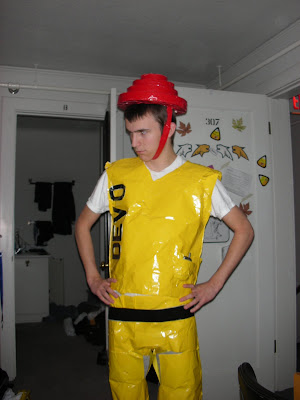 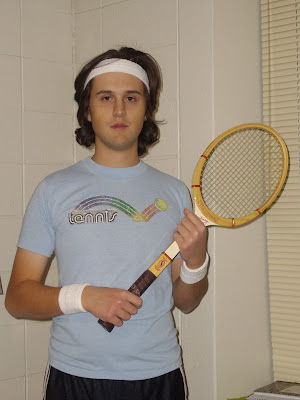 Have a bitchin' Halloween!
Posted by The Kreation Korner at 11:45 PM No comments:

The Kreation Korner is proud to present another daring venture by acclaimed street poet and freelance documentary host Chris Peebles. In his new poem, "Confrontation with a Barber," Peebles' gritty voice illustrates a vivid, disturbing--yet beautiful--picture of the seamy underbelly of Anytown, U.S.A. In an exclusive Kreation Korner interview, Peebles expressed confidence in his latest work of prose. "I see 'Confrontation' as the next step in the evolution of Chris Peebles," he said, "People won't want to read it. They're afraid of what they don't understand. Personally, I don't think there's anything scary about challenging the status quo." And challenge it he does. But you, as the reader, will have to make that decision for yourself. So, without further ado, The Kreation Korner brings you the unbridled, unprecedented, unbelievably mind-blowing "Confrontation with a Barber":

Where are you going
with those scissors
and that smug look on
your face?

Are you a barber
or something?
“A barber?” you scoff
“What year is this?”

Let me tell you
something about barbers
they cut my ears
you unctuous piece of shit.

We can't wait to hear your comments! ~TKK
Posted by The Kreation Korner at 2:18 PM No comments:

The cow is thoughtfully
chewing. I can’t imagine
what she is thinking about.

Probably her calfhood.
Her big sad eyes are
a dead giveaway.

Peebles
Posted by The Kreation Korner at 11:10 PM No comments:

I enjoy a feature-length comedy sci-fi romp just as much as the next person, but do those Hollywood bigwigs honestly expect us to believe Robert Zemeckis' 1985 film "Back to the Future?" Honestly, I can handle an acceptable amount of far-fetchedness, but BTTF maxes out the bogus-o-meter big time. For example, at the beginning of the movie the credits roll as the camera pans slowly over the interior of Dr. Emmett Brown's (Christopher Lloyd) house. What the viewer sees is clock after clock. Doc Brown's house is literally filled with clocks! Does anyone seriously have that many clocks? When was the last time you entered a house filled with clocks? I find it insulting that executive producer Steven Spielberg would trick the public into thinking someone could fit such an unacceptable quantity of clocks into only one house. This film's far-fetched aspects don't end with the clocks. The producers of BTTF continue to exaggerate reality in the next scene when Marty McFly (Michael J. Fox) is late for school. While traveling down the street on his skateboard, Marty decides to accelerate his journey by grabbing onto the back of a car and having it tow him. Yeah right! That would knock you on your ass, and you'd probably get run-over. In the real world, Marty would have died in a grisly road accident, not gotten to school faster. A third and final scene that further emphasizes the outlandishly unbelievable nature of "Back to the Future" is a scene back in 1955 when Marty is being chased by Biff (Thomas F. Wilson) and his cronies. Marty is too swift for his pursuers and causes them to drive their car into a manure truck which promptly empties onto the passengers. A manure truck parked right in the middle of a downtown square? Give me a break! This is by far the most unrealistic aspect of "Back to the Future." I could handle the clocks and the skateboard shenanigans, but the manure truck pushes it over the edge. If you happen to see a truck filled with cow leavings parked smack-dab directly in the middle of a city, please let me know. But I know you'll never let me know because you'll never see one because it’s a stupid, made-up thing that's too ridiculous even for the movies. I could go on all day about BTTF, but I feel like I've made my point adamantly clear. So, Hollywood, here's my message: next time you make a movie about time travel, make it true to reality! --Peter Doe
Posted by The Kreation Korner at 10:18 PM 1 comment:

The newest artist to be featured here at the Korner is known simply as Marilyn. An active feminist, Marilyn's very name seems to posit profound questions as to the state of womanhood in the present and its inextricable link to the past. Her latest creative phase has seen a shift to an intentionally crude style, one which utilizes bright colors and childlike scribblings. Of this particular piece, Marilyn stated that, while her proclamation may at first seem a bit immature, it is in fact TV personalities such as those on The View that are "the real enemy; these women are supposed to represent the women of America? That's the real insult right there. This is simply a tool to keep women from gaining any respect, because honestly, who respects Barbara Walters?" The Kreation Korner is proud to support a thinker like Marilyn and we are confident that her continued creative expression will be of utmost importance in the years to come. 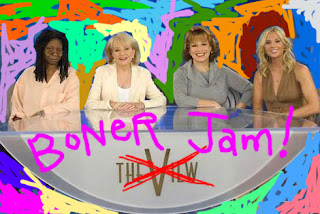 Posted by The Kreation Korner at 10:26 AM No comments:

Today the Kreation Korner is proud to bring you its first of the Featured Artist, Davin Krengel. Krengel's art often showcases and satirizes the absurdities of modern life, and approaches its subjects with erudite wit and a touch of detached despondency. In this piece, Krengel couples a haiku and a rough rendering of an event he says was inspired by a "truly petrifying experience in the living testament to American spirit, the mighty and vast WalMart." 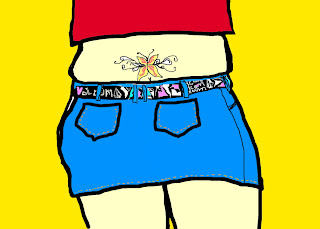