And we're back...from one of our signature multi-week hiatuses. But we return with one of our signature explanations for our absence. Let's begin with some background: as you may have picked up on, one of the themes here at The Korner this year has been the kreative process. We have felt it's important--or, at the very least, interesting--to show our readers what goes into to making a finished Kreation Korner post. One tactic we've used to konvey this was our ill-fated Behind the Korner series. It turns out that this "peak behind the kurtain" was of little interest to our audience, save for a pedantic few. We've learned that, in general, we can't just dump a seemingly unedited pile of crap in front of somebody and expect it to tickle their kreative fancy. As Behind the Korner drew to a close, this realization didn't sit right with us. We felt that ekwilibrium in the Kreative Universe had to be restored. After some deliberation, we deemed the best means to this end was to again gather the trimmings from the proverbial editing room floor but, this time, painstakingly assemble it into a self-kontained final product all its own. It was only natural that the project would take the form of a video, since the most obvious source material was our basementful of unused scraps of tape gathering dust. Locked in from the outside, we spent three weeks at the HQ kollaboratively kompiling the video below. And the early reviews are laudatory! The estate of late-great non-narrative short film critic Rapaport Graves calls it, "Jazz. Pure and simple." Who says kreation by kommittee doesn't work? Hopefully with "Ends & Pieces" (a title inspired by a discount pork product spotted at Tsar Mart) we have redeemed ourselves and can put this difficult chapter behind us. Eyeball:

Posted by The Kreation Korner at 10:44 AM No comments:

Ahoy there! Today The Korner offers you a port in the storm from the turbulent sea of life in this present age. It's a videographical document of Chris Peebles reading material old and new before an eager audience of 50-60 individuals on a roof-top terrace at the new public library in downtown Nampa. The reading was part of the second annual Death Rattle Writers Festival, and Chris would like to extend his sincerest thanks to the fest organizers for taking a chance on a washed-up street poet-cum-documentary host. Peer:

Posted by The Kreation Korner at 8:28 AM No comments:

Finger on the Pulse

Here's what's on people's minds, at least according to the opinion section of The Idaho Statesman--the Boise area's metropolitan newspaper of record: 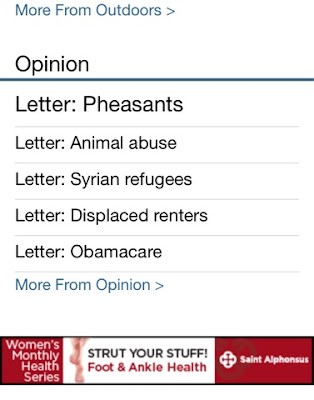 Posted by The Kreation Korner at 7:24 AM No comments:

Please take approximately three minutes of your life to hear an announcement from our friend and kolleague Chris Peebles regarding an exciting new product available from Kreation Systems Worldwide:

Please klick here for your kopy today!
Posted by The Kreation Korner at 6:09 AM No comments: