Today we bring you a truly remarkable specimen--a poem by Chris Peebles' estranged father Chris Peebles, Sr. The poem was delivered to us by staff archivist Gabe Gabriel after he discovered it quite improbably written on the back of a Nagel print shower curtain at a thrift store in Intercourse, Pennsylvania. The brief entry in Kreationism A to Z by legendary art historian Rapaport Graves describes him thusly: Active during the late 1960s to early 1970s, Chris Peebles, Sr. is best described as an unremarkable neo-trancendentalist poet who, like so many of his mediocre peer group, exploited the "flower power" movement to little acclaim. His self-important drivel has not stood and will continue to not stand the test of time. His greatest contribution to the Kreationism Movement is his progeny Chris Peebles, Jr., though the veracity of even this distinction remains a subject of heated debate among certain radical Kreative sects (See "Immakulate Konception Theory" entry, p. 134).  A concise bio, if a bit scathing. But we don't think this is such a bad little poem after all. Open your aperture:

"The Song of the Trees" by Chris Peebles, Sr.

Listen and learn
the voice of the breeze
tickling your ear, shaking the grass
as you lay melting
in the warm august sun

Listen and learn
the Song of the Trees

listen...
Posted by The Kreation Korner at 11:34 AM No comments:

Here at The Korner, we make no bones about the fact that our agenda is, in part, to make the world a better place. Our primary strategy to this end remains the facilitation of a highly visible and widely accessible outlet for the many splendors of Kreation. While often we're kontent to sit back and let the kreative output do its thing once we've loosed it on the public, at times it feels an awful lot like we're resting on our laurels. That's why we're overjoyed today to announce a koncrete tactic from our newly-konvened think tank Kreation Korner labs. In order for the Kreationism Movement to persist long term, it's imperative that we ensure today's children are adequately prepared to enter the talent pipeline. They are, after all, the human capital of tomorrow! Working under this assumption, KKL experts have devised a kurriculum to prepare our youngsters for the uncertain future. It's called STEM and it's a four-discipline acronym to develop the well-rounded, adaptable worker for the 21st century. STEM is komprised of the following subjects:

Semaphore: Good communication is critical to any successful business. But as a massive, unprecedented solar flare is likely to degauss and render useless all electronic devices on Earth at some point in the next several decades, techniques such as the ancient art of flag signaling will be required to get one's message across in a clear and concise manner.

Trap shooting: No activity better instills the "Three Ps" of patience, precision, and perseverance than the trap game. Furthermore, though distasteful, proficiency with firearms will be a requirement of the post-electronic dystopian age.

Eschatology: In the new economy, great business intelligence will demand a working knowledge of the sequence of events during the End Time. Only those young professionals able to anticipate and leverage the unfolding apocalypse will be sorted with the sheep, as it were.

Mario Kart: The fourth and most important component of STEM. As the lost Kreationist Skripture portends, the final battle between good and evil will be hashed out on the rainbow racecourse in the sky. If we truly want the leaders of tomorrow to be number one, we best get them on Nintendo's 64-bit training simulator early and often. 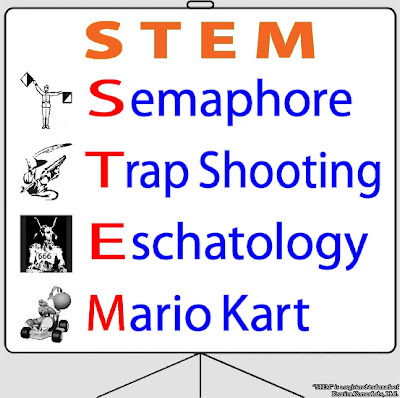 Posted by The Kreation Korner at 5:58 AM No comments:

You will soon acquire a triple-threat metrics wiz who will be the X factor in unlocking your customer-facing cloud potential. 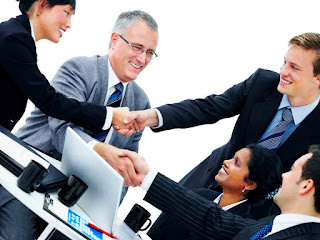 Posted by The Kreation Korner at 2:21 PM No comments: