Good evening, Kreation Konnoisseur. Huey Dood here. Just writing to report to you a kurious incident which okkurred earlier today. It all started when I popped into the Tsarbucks for my kustomary seven-shot decaf blended mochiatte when I happened upon the “zine” pictured below on one of the modernist coffee tables. It appears to be a nightmarish, alternate-universe promotional brochure for economic development in Boise City. A pretty cool, if a bit brief, read. As I finished flipping through its few pages, I was unpleasantly surprised to notice the Korner's kopyright notice slapped on the back kover. As TKK's self-styled brand manager, I fail to see how this unauthorized pamphlet slipped through my rigorous web of internal kontrols. Therefore, there can only be one explanation: some rogue Kreationist has jacked our steez. The good news is that this zine happens to be very much within the realm of what we konsider to be Kreation. Plus, it serves as a valuable piece of free kontent marketing for our Kause. Keep your eyes peeled at coffee spots, bus benches and wherever else free publications are placed in the capital city for your copy today! 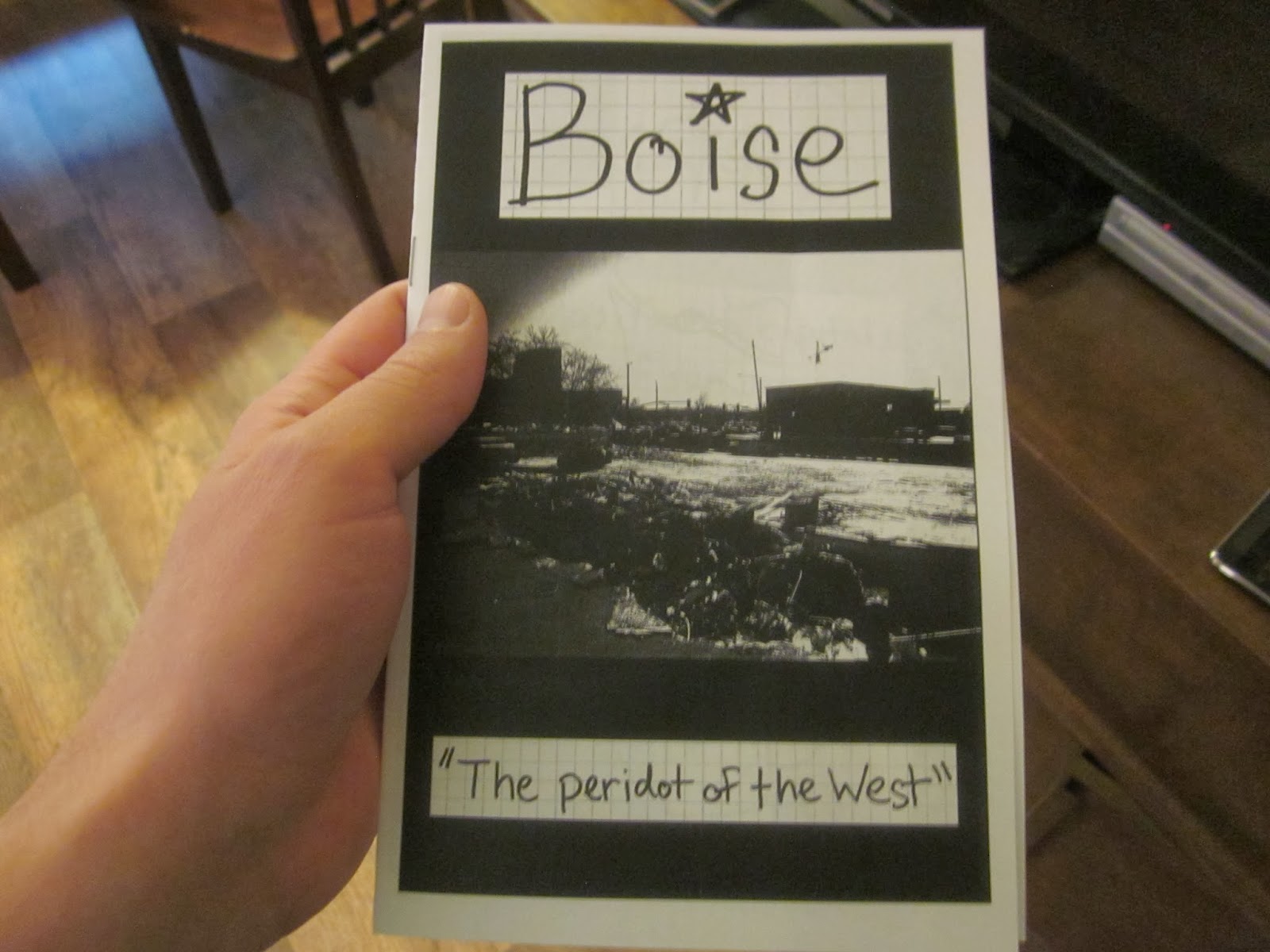 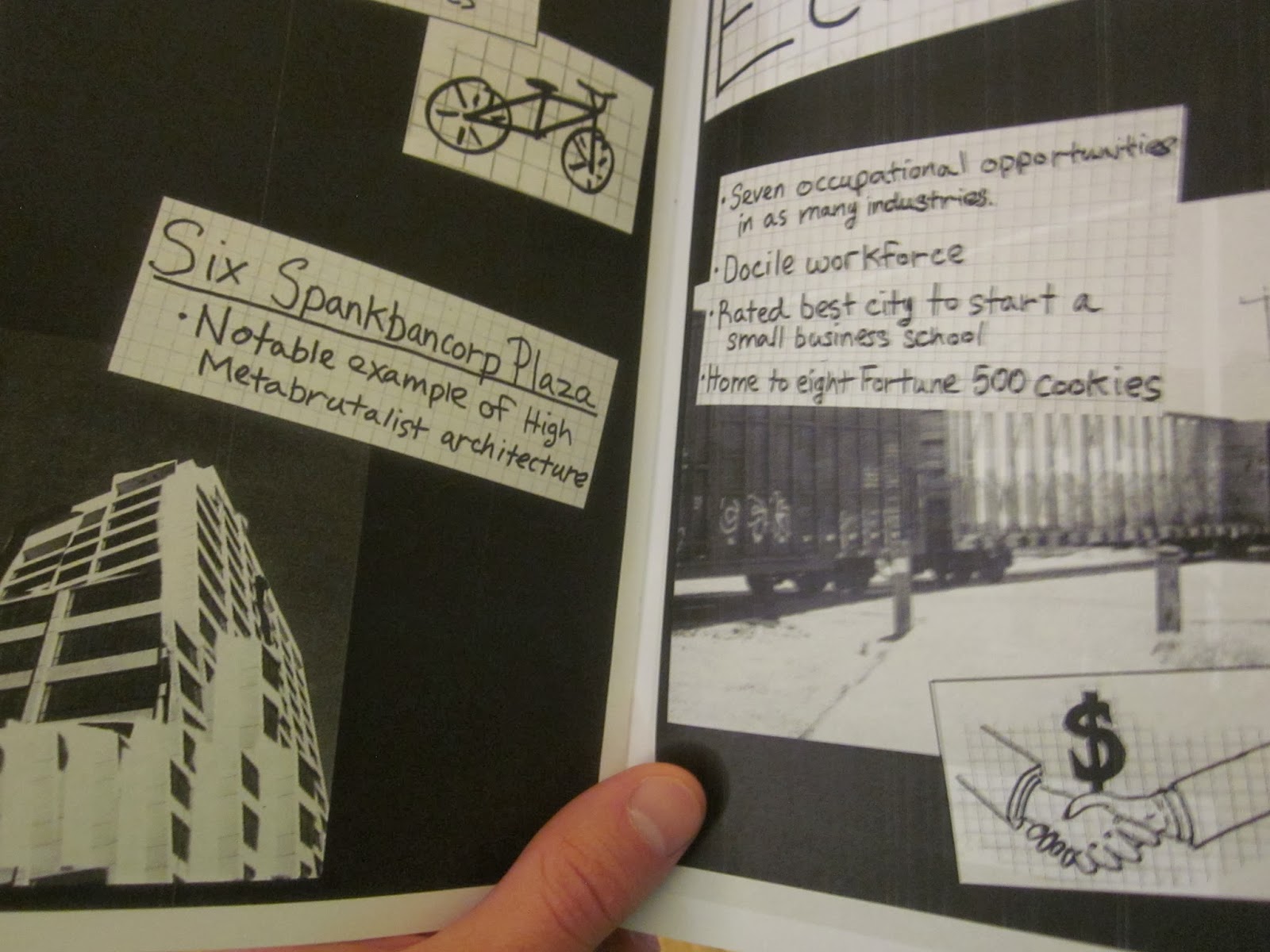 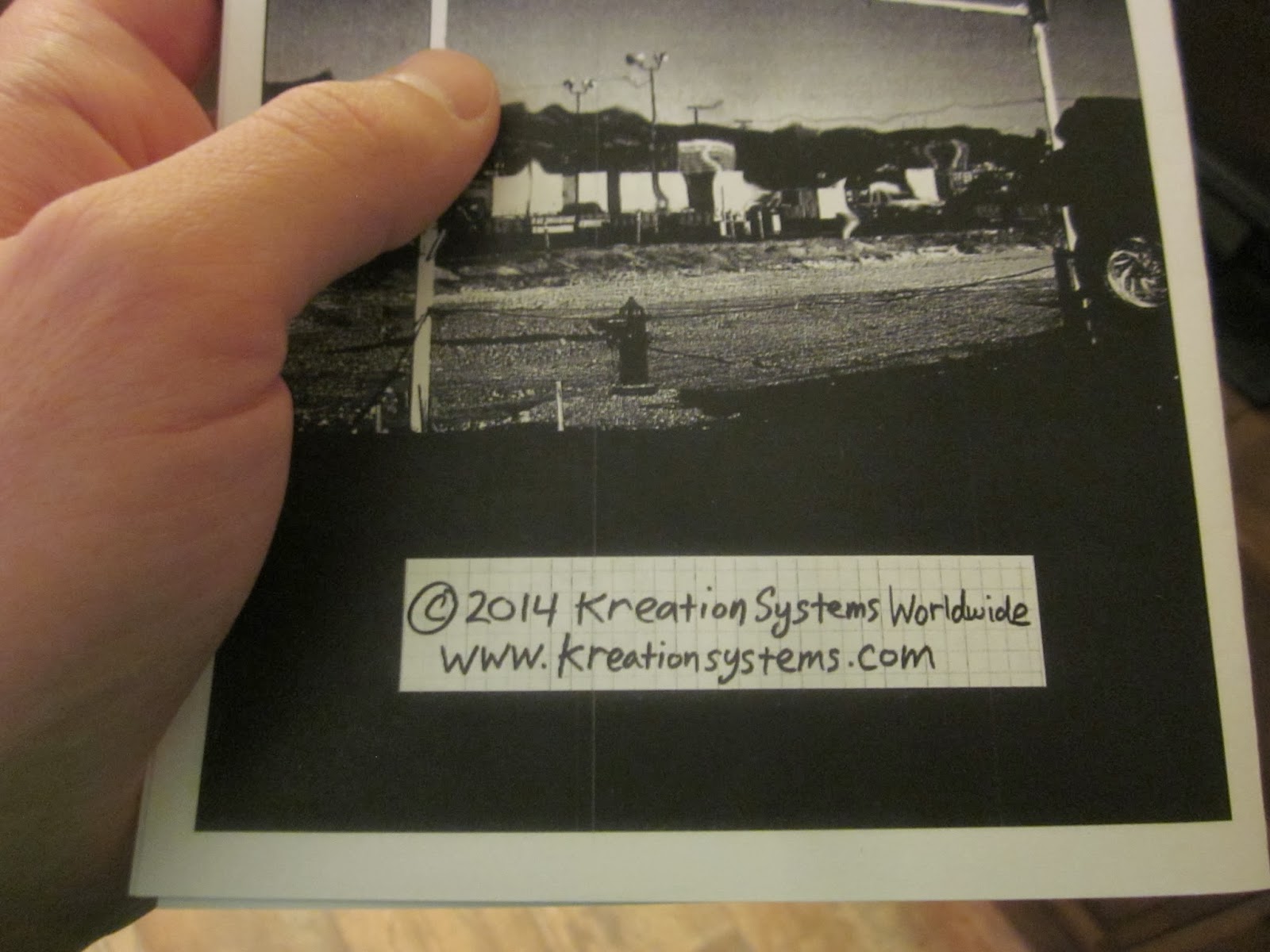 Posted by The Kreation Korner at 9:34 PM No comments:

Greetings, heads. Today we bring you another treasure from the archival project of Gabe Gabriel, a rare recording by white-boy blues weirdo, Old Man Baby. Old Man Baby, alias Jimmy, was a fixture in the counter-cultural happenings of mid-to-late 1960s Boise, ID, and would go on to form and dismantle numerous psychedelic rock bands. He signed to Kreativity Records in June 1964 and recorded prolifically while on their roster. This track, "Burnin-Mattress Blues," was featured on his 1965 album, Coffee Hands, and was a hit among local beats and train-hoppers.


Posted by The Kreation Korner at 3:55 PM No comments:

As winter draws to a welcome close, we eagerly await the germination of new life and the much needed opportunity to stretch out our frozen muscle fibers. At long last, we will heave an anticipated sigh of relief as we lie in cool grasses and gaze into fluffy cumuli as Magic Eye posters of yore. In the Boise scene, springtime is also music festival season. But with another palooza in town this year (see below), some argue that the capital city has reached total music fest saturation. No matter. At The Korner, we like to say that one geographically-isolated mid-sized metropolitan area can never have too much indie ephemera to groove on. 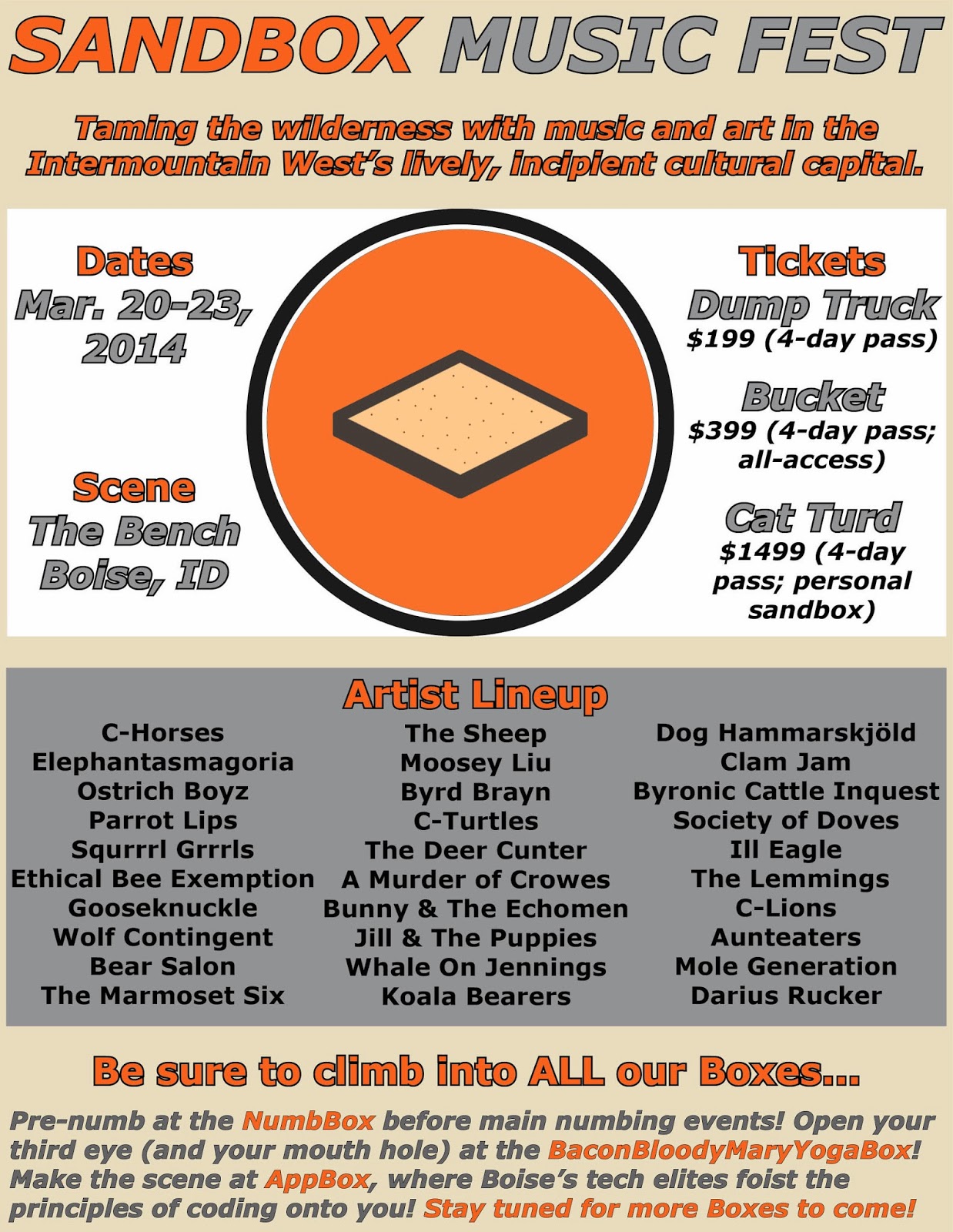 Posted by The Kreation Korner at 6:24 PM No comments:

Here's an update on the recent development drama from the Bench Triweekly Dispatch-Intelligencer online (and only) edition. We didn't read the entire article, but if the lede is any indication, The Korner is sitting pretty into the foreseeable future! Bust a nutgraf:

In an interview with the Dispatch-Intelligencer, Rio Rancho head Hart Packard expressed his dismay over the news but remained confident that redevelopment of the Bench is inevitable.

"It's not a matter of 'if' but of 'when'," Packard said. "I may have fallen, but there's a whole legion of developers behind me waiting in the wings, and they're poised to leverage the necessary assets to make the Bench a value-add for Boise."

Rio Rancho's demise was met with alacrity by some Bench-dwellers. Huey Dood, spokesperson for The Kreation Korner, mentioned that he and his team are elated that the cityscape of the Bench will remain largely unaltered, at least for the time being.

"The Bench is Boise's last outpost of authenticity," Dood said in an email. "Its urban grittiness and modest lease rates are kritical (critical) to our endeavors."

The Boise City Mayor's Office declared that it will establish the Bench Commission, an independent working group tasked to investigate Rio Rancho Con Fuego Del Sol and determine whether or not the City acted too eagerly to allow a single developer to essentially have carte blanche over the reshaping of an entire neighborhood.

A secondary objective of the Commission is to conduct an inquiry into how the controversial practice of "Kreation" has allegedly been occurring unchecked for years in direct violation of Boise's zoning ordinance for medium-density commercial areas.
Posted by The Kreation Korner at 5:58 PM No comments:

Here's a special treat from The Kreation Korner, one that's been ripening in the pipeline for some time. Originally recorded in February 2012, it's quite the gem--nearly 30 minutes of unscripted, unfiltered konversation between Chris Peebles and BLENKO. Although we've introduced you to their video (Boise, LA, SF) and print output in recent years, we've yet to blow your mind, body and soul with an all-audio ko-konstruct. Since not everyone has the privilege of owning an Akai GX-4000D, we've konverted the album from its native reel-to-reel tape to the digital format for your listening konvenience. Although some of the original recording's distinct character was lost in the transfer, we're sure that the interaction of the interlocutors will resonate with you all the same. Hark:

Posted by The Kreation Korner at 8:59 PM No comments:

Today, we hesitantly bring you a "poem" by our benefactor Greg Purt, his first-ever stab at Kreation. Ah well, we suppose it doesn't hurt to let our patron hold kourt every once in a while. Glance over:

"Take my Card, Any Card"
By Greg Purt with Chris Peebles

I am entitled to one
drink at the networking
reception

I am an American

I am a good person

I'm a credit to
my species
A whole line of credit

I run on a track
and never stop

I am entitled to one
drink at this networking
reception

It is my right, my privilege

I will be received

I will be redeemed

I will slap the side
of the Zenith

I will present this ticket to
the bar attendant
Soda water, please,
with a lime

For I am entitled to one
goddamn drink at this network-ass
motherfucker
Posted by The Kreation Korner at 6:05 PM No comments:

Well, it finally happened. We were wondering how long it would take for our eyes and ears to be visited upon again by the unknown guerilla kreationist. Turns out it was slightly over 10 months, a timespan whose symbolism eludes us. Huey Dood discovered this enigmatic clip on loop in his Microsoft Monocle early this morning. It took some doing to export and upload the video, but here goes:

While the intentions, if any, of this video and its predecessors remain shrouded in mystery, we find in them pleasant bemusement rather than fear and foreboding as we let the Spirit of Kreation wash over us, lifting us from konsternation. Such is the unburdening power of Kreationism!
Posted by The Kreation Korner at 7:53 PM No comments:

Here's the latest phantasmagoria from Chris Peebles. To be earnest, we're at a loss for words with this passage. We'll find it less perplexing in a few years when we catch up to Chris. Enkounter:

we reach
a static chamber
after the gates
as fixed bodies

Posted by The Kreation Korner at 8:52 PM No comments: