It was raining again. 27th minute in a row. I popped down a side street to feel less visible. I picked up a soggy newscube only to see that the latest smoked chili pepper had been dumped into the municipal drinking water. Tangy. Couldn’t say that for this damn rain though. It makes one wish humanity hadn’t blotted out the sun.
I walked to the end of the block and sought refuge on the covered porch of a craftsman bungalow. Weren’t too many of these left standing. This one was about 132 years old and had been beautifully renovated into a light manufacturing plant. Industrial fasteners to be exact.
I peered through a triple-pane window--it couldn’t have been a month old. I saw the workers diligently operating their laser lathes and cast molds. I envied them and their orange hard hats and protective eyewear. I yearned for such simplicity. The repetitiveness of manual labor seemed meditative and comfortingly straightforward. Plus you had something to show for a day’s work.
What did I have to show? An “honest day’s work” was foreign to me. I dealt in deceit and lies--precious commodities in an age of post-consumerism. But my interior life was one of turbulence and second-guessing. Maybe I shouldn’t have stopped taking my pills. The stooge at the Equanimity Minister’s office all but massaged my throat during my last visit.
The newscube had now degraded into an unreadable lump of pulp in my hands. It struck me as counterintuitive that news media had only become more paper-intensive over the years. This thought slipped away, though, as I noticed the unmistakable magenta glint of a bounty hunter's vest down on the main drag. I had been followed. Time to hit the wet road.
--Jawn Steighmeaus
Posted by The Kreation Korner at 4:19 PM No comments:

The old "Donkey in a Top Hat" bit as told by Svetlana Mendoza, Part XIII:

The foreman unholstered his revolver and fired two warning shots into the air, scattering the strikers.
He then sprinted to the donkey’s side and, placing the crumpled top hat back on the mammal’s bruised and bloodied head, attempted to comfort him in his final moments.
“Why did you do it?” asked the foreman, tears welling in his eyes.

To Be Kontinued...
Posted by The Kreation Korner at 9:21 PM No comments:

ABSOLUTIST CALLERS by the chris peebles

They said I have no right
to suffer.

I said that’s not fair.

I said life’s hard for everyone,
then had security escort
them out.
Posted by The Kreation Korner at 10:28 PM No comments:

And where am I these days?
And who's to say--
Who's really to say
That you--
Ain't me?
Now wouldn't that be a good one.

And how now--
How now?
How do we come to know our future
before our time?

And where am I these days? 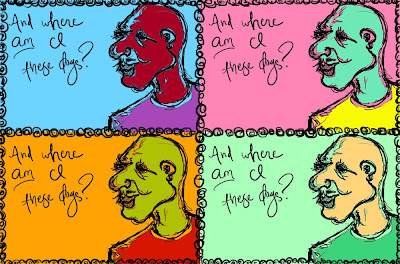 (visual interpretation skillfully (k)rendered by lee watt)
Posted by The Kreation Korner at 9:44 PM No comments:

The other day we posted some strong words about our patron Chas Murdoch. Maybe our accusations were founded on some kernel of truth, but who's to tell? The fact is, things can get out of hand when you pack upwards of twelve kreationists into the cramped, poorly ventilated space we call home. What may begin as light-hearted kreative banter can soon spiral out of control. Usually this kind of interaction leads to some truly kutting-edge output, but it seems this time we forgot ourselves and attacked the one man who makes our operation possible. We feel that today is as good a day as any for this form of self reflection. St. Valentine's Day isn't just about massacring your opponents--it's also about embracing that most krucial komponent of the human experience: love. That's right. Love. If we can't love one another, then we're no better than those subversive agents who would seek to sabotage the mission of Kreationism. Cynicism and suspiciousness are easy mindsets to fall into, but they will only make us hollow husks of humans in the end. Thank you all for bearing with us as we wrestle with and ultimately subdue the monsters that dwell within us all.

Posted by The Kreation Korner at 11:13 AM No comments:

There’s been a noticeable lack of kontent these past few weeks and for that we humbly ask your forgiveness. But in our defense, kreating has been the least of worries. The least indeed. We here at The Korner have been embroiled in a krisis whose implications span far beyond the four or so walls of the HQ. Let’s start from the beginning...
Remember a month ago when we suffered the loss of our beloved kustodian Errick Walsh? Do you further recall the potentially nefarious circumstances surrounding his demise? Well, it sure didn’t sit well with us so we did some digging. Our staff hacker-cum-transparency advocate Damien Melange stumbled upon a digitized ledger belonging to none other than our supposedly benevolent financier Chas Murdoch. In this document, we noticed a troubling line indicating that Murdoch paid the late Walsh $250 US for something called “services rendered”. Who knows what this could mean? All we know is that it sounds sinister and that Errick died a week later. This is too coincidental to be an accident if you ask us. Do we think Walsh was paid to do something unsavory and was subsequently offed to keep his mouth shut? Not necessarily. But we believe in something called the burden of proof. We've been more than tolerant of Mr. Murdoch's kut-throat korporate ways in the past, but now we demand a statement regarding his komplicity in this despicable act. Errick Walsh deserves dignity even in death and, more importantly, the dignity of the entire Kreative experiment must be upheld. We await a response.
Posted by The Kreation Korner at 10:20 AM No comments: