Every so often under the auspices of the Kreation God(s), we are blessed with the presence of a truly exemplary kreationist. We are speaking this week of Krebvn Gyergözt, a man from another place. He recently arrived in this country from some former soviet bloc state--we're not sure which one or if it even still exists. He claims to subscribe to the 1880s French Aesthetic School of Kreative thought, whose motto was "kréation pour l'kréation"--or at least we think that's what he said. But whatever strain he hails from, what's clear is that Mr. Gyergözt bleeds the kolors of kreation. We present to you today a poem he wrote in ginger ale on a cocktail napkin during the long plane ride to the States. Ruminate:

Man of village make
dog bite face of child
I wear hat of father and
talk to old woman
at market who make soup
to feed beast of forest
Sharp teeth make injury
mind of adolescent
Blood in borscht
make pestilence
of stomach
Posted by The Kreation Korner at 10:59 AM No comments: 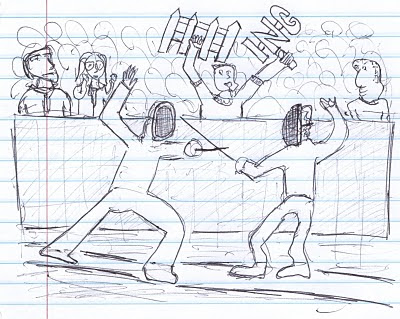 From the desk of Hadley Daughterson
Posted by The Kreation Korner at 8:28 PM No comments:

Don't Get Snappy with Me...

Today we check in with a selection from the Octogenarian Acid King himself, Snappy Tom. Truthfully, we can't be sure of his age, but through the emerging Kreationist science of Guesswork, we'd place it around 83. The optimal setting and circumstances for this reading have been included. Unfortunately, we can't guarantee your comprehension of the story without these steps.

1. Combine milkweed with cinnamon and hot glue in a Chinese cymbal. Heat for three hours.
2. Select a vision quest guide to read the passage to you.
3. After ingesting the ayahuasca-like substance you brewed earlier, play BTO's hard-rock classic "Takin' Care of Business" in reverse.
4. Instruct your guide to read the following text once and only once:

By this point, if you have followed the necessary steps, you will have been enveloped by all the wonder and glory of inner and outer space, and this text will be of no use to you. Expect violent purging within the hour.
Posted by The Kreation Korner at 8:04 PM No comments:

Recently, our golden boy Chris Peebles popped into The College of Idaho unannounced. Departing from his customary visceral, trance-like delivery, Peebles regaled the unsuspecting students with a modest, conversational rendition of some old Steighmeaus standbys. Peebles later expressed distaste with the audience's intermittent laughter at such serious prose, but was glad he "elicited at least some sign of life from those kreative invalids." The C of I may be the most reputable institution of higher learning on the 200 block of Cleveland Boulevard in Caldwell, ID, but Peebles' turn of phrase no doubt made this esteemed bastion of academia look more like an encampment of mental infants. Bask in:

Posted by The Kreation Korner at 11:13 PM No comments:

It's been a little over a week since the Doe/Stillwater now infamous "Tumult on the Tundra" drew to a sudden, sensational and all together unexpected end. But we find that the title of Kommentator Laureate remains unbestowed. Who, pray tell, was victorious? If you ask Captain Gooding, Peter Doe's severe tobacco-induced angina delivered the knockout blow. But wise-kracking aside, only time will tell if we can finally file the Doe/Stillwater hash under "s" for settled. Our koncern now is with the still ill Doe. Recently extradited from Our Lady of the ICBM Silo Regional Medical Center to a slightly better hospital here in the states, Peterskeeter's kondition has stabilized slightly, but he'll most likely remain convalescent for the better part of a month. But why despair at Mr. Doe's unfortunate situation? We at The Korner see it as an opportunity to reprise an old recurring feature. Peter himself would agree that all the best expressions of Kreativity are churned out during times of pain and hardship. Also, we figure if he's in bed all day he might as well get some work done. So, channel your positive thoughts towards a speedy recovery for Peter Doe, and, in the meantime, allow him to dispense some wisdom upon you. Endure:

Dear Peter,
I have this friend--call him Clint--who always borrows my belongings and doesn't return them. I'll ask him politely to give me my property back, but he always changes the subject. Like the other week, for example, I loaned him my bichon frise Trent. A few days back, I asked him--in a civil manner mind you--to restore my canine counterpart to my company. He just avoided my request and said, "They got these dogs in Europe that carry brandy kegs around their necks to avalanche victims. Gotta get me a few of those..." etc. I'm stumped. I would like to get back my thousands of dollars worth of possessions--some of them crucial necessities--but I don't want to destroy my friendship with Clint in the process. Help me out, Peter. What should I do?
Sincerely,
Distressed in Dishman, WA

Dear Distressed,
You think you got problems?? Shee-it! They got me handcuffed to a Hill-Rom! They I say it'll prevent me from escaping the hospital. I tried walking out twice before, which I guess is not allowed. These so-called "medical professionals" say I got a bum ticker and need to stay in bed. What do these college boys know? I've never felt better in my life, but now I'm basically incarcerated in a dimly lit room with naught but a curtain separating me from a third-degree burn victim. Plus the channel changer only goes up! This is no way to live. But what really deveins my prawns is this diet they got me on. I never knew there were so many flavors of Jello! Hell, I should be eating Texas toast. Now that's brain food. Except they won't give me any since--they claim--my strict regiment of it contributed to my alleged heart failure. And what's all this I hear about me caving to that punk Stillwater? Our apparent chummery at the birthday bash was nothing more than phosphorus-phueled delirium. I ain't soft!! When I get out of this dump I'm giving that kid a what-for, then I'm gonna give him another what-for when he's unkonscious. That'll teach him to challenge my kommenticular authority! Until then, I'll just watch this channel that looks like CCTV footage of a tropical fish tank.
Your Friend,
Peter

Unfortunately, Mr. Doe is uninsured. He needs all the help he can get. We are accepting your donations and your prayers—but preferably your donations. Please provide said gifts in the form of unmarked big bills in a nondescript envelope. Slide them under the front door of the HQ. Thanks!
Posted by The Kreation Korner at 12:57 PM No comments:

Battle of the (Kommentary) Titans

The new year is a time for reflection. Sometimes that reflection comes in the form of a heartfelt discussion among friends, other times in steadfast resolutions to create a better life for oneself. And then there are the times that reflection comes in the form of an avant-garde beef-settling boxing match between kreationist kolleagues. Such is the case with our latest post. Having answered the call of Peter Doe's challenge in May 2009, Peter Doe announced to the press that he would meet Stillwater toe-to-toe in the Russian ring for a bout that promised to be harder than any Skittles-vodka concoction that one could imagine. Taking place on the Kamchatka Peninsula, the match would effectively end all further dispute between Doe and Stillwater. So, without further ado, enjoy our coverage of Doe vs. Stillwater: The Reckoning. Peter Doe (right) was all fire and brimstone at the pre-fight press conference, threatening that at the end of the match, Stillwater's face "will make Picasso's 'Girl in Chair' look like the goddamn Mona Lisa!" 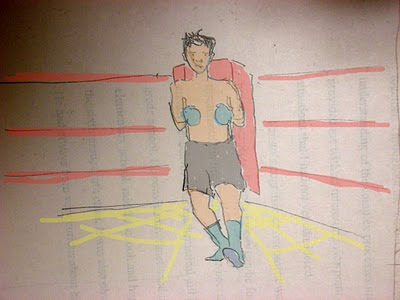 Nash Stillwater, the younger of the two, in his korner. Stillwater spent several months training under the tutelage of Maljohn, komik artist and seasoned street fighter. 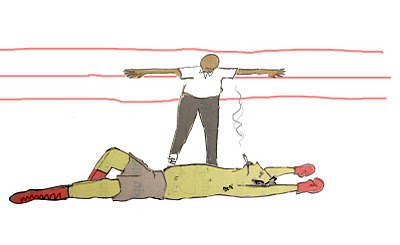 Peter Doe opted for a different approach to training, spending the few months leading up to the match locked in a dark room with a palette of Parliament Ultra Lights and VHS tapes of predatory attacks in the Sarangeti. He collapsed approximately 30 seconds before the start of the first round.

Doe being carted from the scene. Despite his collapse, Doe later claimed that a "moral victory" had been won. Stillwater declined to comment.
Posted by The Kreation Korner at 7:05 PM No comments: