I won't deny it. After my sabbatical in England (the country), I'm glad to be back in America, The United States of. As you know, this country has a way of getting my goat at an alarming ramming speed a la 1959's Ben-Hur. But this goat-getting pales in comparison to the extra-flagrant goat-getting I received across the pond (which, to my surprise, was actually more of an ocean). My goat was gotten over there in a way I only thought possible in the most far-fetched of science fiction radio plays. That miserable isle actually achieved the impossible feat of making the U.S. look semi-tolerable. If I had a sentimental tendon in my body, I would say that even missed this nation.
I'm sure by now your wondering, "what are you wearing?" But what I'll tell you instead is why I traveled to Britain, pervert.
My intentions for visiting Britannica Firma were honest enough, but I wasn't, to my disgust, met halfway. I hoped to clear my head, get a knew perspective on life--all that shit. Rather than finding an enlightened cultural and artistic bastion of capital-k Kreationist proportions, I found an intellectual cesspool riddled with poorly planned avenues of ignorance and bad taste (I'm not referring to the food, which was actually quite good).
I could go on for a fortnight addressing my many beefs with the so called "United Kingdom," but instead I'll focus on one in particular which I feel pretty much sums up my assorted grievances. What I'm speaking of is Britain's baffling, unrefined, kreativity-killing ripoff of the American language. Everything about it is off. They call an elevatortruck a "liftlory." What the hell is that? And get this: they refer to a frenchfryline as a "chipqueue." Seriously? That sounds like some sort of liver disease--which I'm sure is rampant in that booze-soaked country. The list goes on: policeofficertrunk = "bobbyboot." Bottomlawyer = "bumbarrister." Gasolinecigarette = "petrolfag." Another particularly unsavory example is "pramtorch." What does this mean? If you guessed strollerflashlight then you're correct. You're also a fucking Tory who should be tarred and feathered if you're not already.
I have merely scratched the surface of Britain's pervasive and probably intentional bastardization of English. Any people who so skullduggerously corrupt a perfect language are certainly bereft of any semblance of kreativity.
I can now understand our founding fathers, putty-brained as they were. To depart from my policy of never being grateful, I'm grateful that these otherwise incompetent men were able to accidentally stumble upon the good decision-making skills necessary for expelling their unkreative, amoral oppressors. --Peter Doe
Posted by The Kreation Korner at 4:59 PM No comments:

Upon cursory visual inspection, Bobby appeared to be suited up. Undeniably so. I felt compelled to pop the big question.
"Whatcha suited up for there, Bobby?" I inquired, voice aquiver.
Everyone was wondering it, but I was the only one be-huevoed enough to ask--though admittedly at the expense of some bladder control.
Rather than replying to me, Bobby began to play his "it-is-impossible-for-me-to-respond-to-you-by-virtue-of-the-fact-that-I-have-no-senses" game. Typical.
Bobby was easily the third worst ear, nose and throat doctor I have ever had. --Jawn Steighmeaus
Posted by The Kreation Korner at 4:48 PM No comments:

well, i was supposed to meet her at the mall, but she didn't show
UP.

yeah, i told her to meet me at the, umm, MALL. but she didn't show up, you know?


no, no, see, we were supposed to meet up at the mall like a HALF-HOUR ago.
she was supposed to,
i planned to MEET her there. yeah. i just don't think she can be, uhh, trusted.

Posted by The Kreation Korner at 12:04 AM No comments:

This week we have lost a true komrade in kreationism, the beautiful human known as Lux Interior. He has influenced each and every one of us at the Korner and will be sorely missed. We leave you with a prime example of the things we loved most about Lux -- his energy; his soul; and, perhaps most of all, his ill-fitting leather pants.

Posted by The Kreation Korner at 7:01 PM No comments:

Hello, you of the wondrous and strange multitudes! Today we bring before you yet another slice of fried gold in the form of a brand-new header piece. The featured artist is Art Cretaceo. What has Art to say about his art? Well, we were wondering the same, so we had a little sit-down with him to figure out what makes Art tick.

AC: I'd like to say I'm a visionary and a guiding light. Always maintaining a clear vantage point on the events of the day, the year, the times. Like a pterosaur in flight, really.

KK: Art, what do you think is the purpose of your art?

AC: My intent is threefold, much like the horns of a Triceratops. First, to shock. Second, to awaken. Third, to incite.

KK: Any words for the readers?

AC: In fact, yes. In this crazy world, we must be ever-vigilant against the hucksters, the alarmists, and the hooligans. We must navigate the world with all the agility of a clever dilophosaur, all the steady intent of a methodical diplodocid, and all the fierce confidence of the mighty Tyrannosaur.

KK: A final question. Do you draw inspiration from anything in particular, perhaps from the natural realm?

KK: Art, thanks for your time. 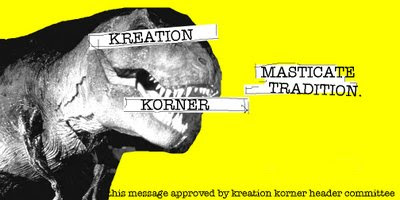 Posted by The Kreation Korner at 6:01 PM No comments: