Good tidings Lee brings to you and your kin! That's right, Lee Watt is back -- and how! After a much-needed sabbatical devoted to the exploration of oil slicks as a veritable art medium, the Korner's enigmatic kartoonist is back at it with a series entitled, "Things aren't what they seem, even if they may look like it. Haven't you ever heard the saying, 'Don't judge a book by its cover?'" The first in the "TAWTSEITMLLIHYEHSDJBBC?" series is a heady combo of razor-sharp cultural critique and minima-expressionist illustrations that will leave you drink with somber meditation. Pump up the jam: 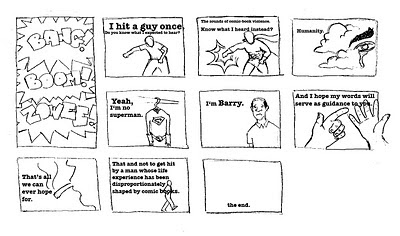 Posted by The Kreation Korner at 4:45 PM No comments:

No. 16: "Everything is exactly what it seems."
No. 17: "Cleopatra isn't the only queen of denial. The other is Hatshepsut."
Posted by The Kreation Korner at 3:04 PM No comments:

Buenos day to you! Before we unveil the latest installment in Svetlana Mendoza's groundbreaking episodic joke, we present you with a bonus feature: the komedienne's much awaited kontributor bio! Peruse:

Little is known about Svetlana Mendoza. This kharismatic comedienne keeps much of her early life close to the bodice. What we do know is that she is a missile crisis baby--perhaps the only one. Born to a Cuban father and Russian mother, she grew up on the wrong side of Smolensk raised almost exclusively by an ex-KGB nanny who had ice water for blood. Our best guess is that she arrived in the US sometime around 3:47 pm on July 15, 1996--but that’s just a rough estimate. Legend has it that Svetlana--dreaming of better opportunities in America--smuggled herself into the country in a box of streamers belonging to Russia’s Olympic rhythmic gymnastics team. Once stateside, Mendoza began hitchhiking across this great land--after allegedly watching a few of the minor field events. From then on it was a life on the road, relying on the charity of strangers for a meal and a place to sleep. It was during this itinerate phase of Svetlana’s life that she saw her first Sinbad VHS, a revelatory experience that set her on her present career path. “The energy, the passion, the clothing,” Mendoza recalled. “It was then that I knew my calling in life.” Starting with an open mic at Knock 'Em Dead Comedy Club and Crematorium in Gastonia, NC, Svetlana cut her teeth at dive bars, laundromats and street corners from the South Atlantic Seaboard to the Great Basin. Her unorthodox, uncanny, untamed style earned her a reputation as one of the least funny traveling acts. Shows how much the kritics know! When Mendoza isn't causing her fellow kontributors to writhe around on the floor of the HQ in laughter, she is an outspoken activist against the rampant portrayal of Russians in film and television as sociopathic arms dealers. The Kreation Korner is truly lucky to have a kreationist of such kaliber on staff.

The old "Donkey in a Top Hat" bit as told by Svetlana Mendoza, Part IX:

When their food arrived, the donkey in a top hat and the foreman ate pollo con mole faster than either ever had
The foreman even burned his wrist the plate, despite the server’s explicit warning of its hotness
Rather than waiting to deal with the foreman’s debit card, the man and beast just laid cash on the table (including a less-than-generous tip) before hitting the pavement

To Be Kontinued...
Posted by The Kreation Korner at 2:49 PM No comments: 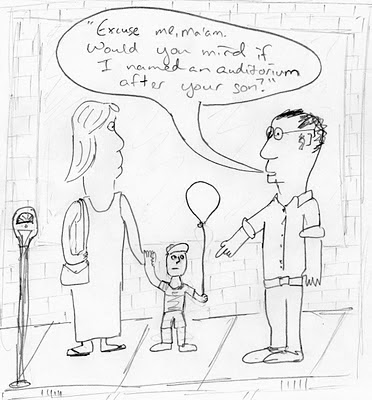 --Hadley Daughterson
Posted by The Kreation Korner at 3:04 PM No comments:

What gives you the right?

What gives you the right?

I see you over there trying
to hide your face.
You must think I can’t see
you but I can.
And I’m asking you:
what gives you the right??

What gives you the right
to treat me as inferior?
You can’t make me feel
inferior unless I give
you permission.
Eleanor Rigby said that.

You think just because
you’re a dentist you can
prod and poke at my molars?
And incisors?

DDS--those are just letters.
Two the same, one different,
like the chambers of my
amphibian heart--a heart
which you have broken into
countless pieces.

Like a shattered mirror in
the corridor of discontent.

--Chris Peebles
Posted by The Kreation Korner at 11:27 AM No comments: