Back in the Day

To placate The Korner's staff nonagenarian, we once again bring you K. Hume O'Henderbaum. Kurmudgeonly as ever, Mr. O'Henderbaum highlights several of his latest beefs with this day and age in a meandering, almost incoherent diatribe. While staff opinion of this dinosaur is mixed tending towards dislike, kommentator Peter Doe is an avid follower. "Hume's good. Damn good. His stuff was my bread and butter growing up. Hell, I'd probably be him if I were born 50 years earlier," Doe remarked. What will you, the reader, think of K. Hume? See for yourself:

If there's one thing I don't understand about the world today it's the seatbelt. There are seatbelts in every automobile these days, and you're goddamned if you don't wear 'em. And that's not just because the sheriff'll get sore at you--the whole town will scoff and scowl at you. I just don't get it. In my day, we didn't need seatbelts. The namby-pamby, good-for-nothing kids of today think they're too good to be forcibly ejected through a windshield. But let me tell you, that kinda thing builds character. I wouldn't be half the man I am today if I hadn't lost my legs in that Model T collision--which is ironic, because I am physically half the man I was.
But that's not the point. The point is people today are weak. They're all, "Oh, boo-hoo, I just cut myself on a rusty nail. I need a tetanus shot!" Hog wash! We'd got cut up all the time in my day, and would think nothing of it. So tetanus and gangrene were rampant. But what did gangrene ever do to anyone except for the occasional need for amputation? Look at me: I have no legs and I get by just fine. Not many other old-timers like myself own their own houseboat. I don't see what the big fuss is over these "germ" things that are probably just a government hoax designed to scare folks.
There are a lot of things I don't understand about this crazy world as of late, but one thing that puzzles me perhaps more than any other is the so-called "condom." I hear that nowadays people use something called "latex" as a contraceptive barrier during the physical act of love. I don't know what this latex is but its probably something some bleeding-heart, liberal, intellectual, commie college-boy invented back east. What I do know is that I'll stick to the trusty, honest, good old-fashioned method of birth control: a tied-off segment of sheep's intestine. So what if it resulted in 25 unwanted pregnancies over the years? Last I checked, .300 is a pretty good batting average. And anyways, only seven of those 25 survived 'til maturity due to the limited medical technology of that time.
In conclusion, get off my lawn you kids!
Posted by The Kreation Korner at 11:09 PM No comments:

Today, The Korner is overjoyed to bring you the latest from Chris Peebles entitled "Deceit is the Parent Material of Hurt Feelings." Need we say more? No, we do not. Obtain:

Stop lying to me.
Stop lying on my
thorax as well.
I can’t breathe when
you compress my
lungs like that.

My mind is also
suffocating due
to your dishonesty.
You’re like a blanket
of mongeese woven
together smothering
a bedful of innocent
cobras.
Posted by The Kreation Korner at 11:02 AM No comments:

The Komedy Korner has been an adored installation on this, the Korner of Kreation, for many moons. For a long time, none but Svetlana Mendoza dared step to the behemoth that is kreative komedy. And so it is with great pleasure and pride that we bring to you a brand-new komedian by the name of Captain Gooding. Hear, ye:


Why did the chicken cross the road?

To participate in the ritualistic cannibalism of its own kin by way of McDonald's, wherein it would order and consume a ten-piece Chicken McNugget meal.
Posted by The Kreation Korner at 8:06 PM No comments:

This week, The Korner is proud to present the work of a recent addition to the Krew--Hadley Daughterson. We hired Hadley three months ago to assist with various admin at the HQ. Her deft propensity for assembling pencil lines on paper into art became rapidly apparent, as she often doodled indifferently on a legal pad rather than completing her assorted menial tasks. Recognizing her as the shrewd Kreationist she is, we signed her on to an unlimited kontract instead of shit-kanning her. Turns out we made the right decision: Hadley's inaugural entry flawlessly combines wit, grit, social commentary and good old-fashioned aesthetic value into an unrelenting mind-missile. Vintage Kreativity. We're plenty kontent--save for the open office lackey position (slide résumés under front door). Requisition: 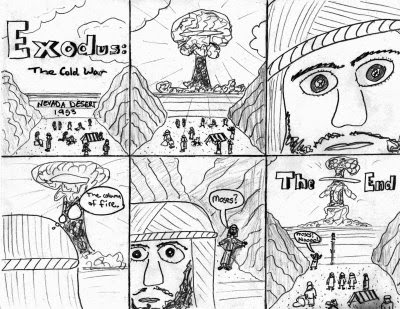 Posted by The Kreation Korner at 2:08 PM No comments:

Recently, our archivist stumbled across a transcript. You're probably thinking, "So what? I bet the intrepid Kaptains of Kreation unearth similar documents daily." Well, you're right. But you're also very, very wrong. This sheaf of papers is not another mere document whose only use is to be crumpled and thrown into a trash can in a vain forgery of basketball. It is in fact a transcription of a keynote speech our man Chris Peebles delivered for the Kansas Intermountain Alternative Arts College Class of 2008 (Go Chimeras!). Regrettably, we at The Korner inadvertently destroyed the original Super 8 footage of the address during a peyote-fueled kroquet sesh (session). Before you start screaming and drive a fist through your monitor, we have good news. The highly nuanced visual element of Peebles' speech is not lost forever. Our very own Gabe Gabriel was present at the event, and--as Peebles' inspiring words and actions were forever emblazoned into his memory--was able to go through the transcript and add annotations, flawlessly capturing the entire experience. So sit back, relax, and be jealous that this wasn't your commencement address (that is, unless you're a member of the KIAAC class of '08):

"Was there something innate in our founding fathers' DNA?"
Peebles shakes his head slowly back and forth three times, then does a single high kick with his right leg
"If B.D. Wong injected Thomas Jefferson's mummified essence into an ostrich egg, what would it yield?"
Peebles kneels, brandishes a can of pineapple Fanta, then pours the contents on his head
"Would a swivel-chair-inventing constitution machine burst forth from its calcium carbonate confines?"
Peebles runs in a large circle counterclockwise around the stage three times, jumps in place whilst clapping for approximately nine seconds, and then does a somersault back to the podium
"Or would we just get a bird, flightless and bearing too few feathers to make a decent pillow?"
Peebles straddles the provost seated at the end of the stage and makes a "raise the roof" gesture as he thrusts his hips vigorously
"They never used T.J.'s feathers to make a head cushion."
Peebles produces a single red rose from his pocket, sets it ablaze with a pistol-shaped cigarette lighter, then hurls the flower at the flag of Kansas
"Nor Ben Franklin's, for that matter."
Peebles flaps his arms wildly six to eleven times and then screams, "innovation!"
"In the end, these men met far better fates, which is what we should all hope for."
Peebles wraps the mic chord around his left arm, then inscribes a letter "m" on his Adam's apple with a magenta Sharpie he had removed from a houndstooth fedora beneath the podium just moments before
"Not just the alchemy majors."
With a wry smile, Peebles points a finger at the graduates. Scattered laughter ensues followed by several muffled coughs
"You kids are the future."
Peebles' form explodes into an orgy of skipping, jumping, twirling, fist-pumping, head-shaking, foot-tapping, hand-flailing and various other fiercely kreative bodily expressions. Suddenly, Peebles freezes, as if stricken, and crumples to the floor in a supine position. Peebles remains motionless on stage until the end of the commencement exercises at which point several security guards drag him offstage.
Posted by The Kreation Korner at 2:46 PM No comments:

Good day (English for guten tag)! As you may have noticed, The Kreation Korner's maverick kommentator Peter Doe recently issued some brutally articulate statements about England (the country), calling into question her kreative merit. In no way disparaging Mr. Doe's intellect or judgement skills, we--The Kreation Korner Staff--humbly disagree with his indictment. We actually have compelling evidence in the form of an image that proves that the entire United Kingdom (with the exception of several towns in Scotland) is in fact a vibrant outpost of kreativity. 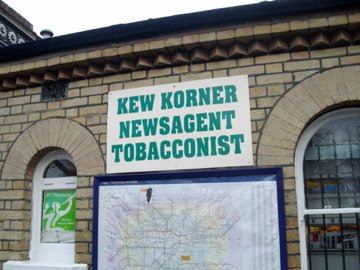 This photo was taken by a Korner field operative in West London. The origin of the word "kew" has long been a subject of debate for academics and kreationists alike. As best as our etymology department (not to be confused with our now defunct entomology department) can tell, "kew" is an ancient Celtic word meaning imaginivity--which is, as a concept, startlingly similar to kreativity. Even more startling are the implications of this diskovery. How far back do the roots of kreationism in England go? Is this purveyor of nicotine and print media the last vestige of some iteration of kreation kulture millennia old? Or is it one of four or five vestiges, each one more shrouded in mystery than the last? What is clear is that the spirit of Kreationism is stalwartly established in the British Isles.

Nearly two months ago, we presented to you a German artifact bearing similar implications. We don't know exactly what these signs mean or when the next one will appear, but what is clear is that we are not alone in the [kreationism] universe. At The Korner, we firmly advise you--and all our readers for that matter--not to panic. Are these symbols of a sinister nature, perhaps the doings of an ill-intentioned worldwide konspiracy? We don't know. All we can do at this point is keep our heads up and kontinue kreating like it's nobody's business.