Working for the better part of the last decade, BLENKO has become a prime mover, shaker, and originator of the vinyl-adhesive (VinAd) movement. An outspoken proponent of Kreationism and a vital component of the fabled Kreation Korner, BLENKO’s work can be witnessed on public surfaces throughout the Pacific Northwest of the United States. (Occasionally, though, it won’t be where you think it should be. That’s because it gets taken down, or maybe succumbs to wind or rain.) BLENKO’s unique marriage of words and images has left an indelible mark on the legacy of kreationism. His recent kollaborations with Chris Peebles have likewise been received with alacrity. Spiritually, BLENKO currently resides in your mind. Physically, he’s in or around San Francisco, CA. 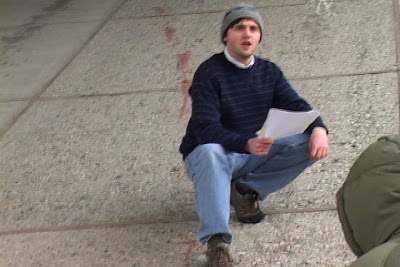 Chris Peebles was born to Canadian immigrants Chris Sr. and Martha Peebles at Our Lady of the Cacti Regional Medical Center in Cityville, New Mexico on March 16, 1981. For much of his early life, the sensitive Peebles was ostracized by his peers. In 1991, a sandstorm consumed Cityville, completely wiping it off the map. Luckily, by this point in time, Peebles had settled in the burgeoning cultural hub of Boise, Idaho with his parents who had started an edible shoe business there. Although long removed physically from Cityville, Peebles credits the town’s unfortunate destruction as one of his earliest inspirations for becoming a wandering street poet. “It’s just the fact that…a whole town…jeez…wow,” Peebles said of the incident. Another pivotal determining factor for Peebles’ ultimate career came in 1994 with the divorce of his parents following the disappointingly low market for edible shoes. The family plunged into financial ruin, and Peebles found little solace at home and school. He, instead, took his frustrations to the street, channeling his angst the only way he knew how. By about 1997, Peebles had gained local fame for his raw, unbridled brand of street poetry. He would often appear, unexpectedly, in public cafes, grocery stores, and health clinics and immediately launch into spontaneous fits of unprecedented poetic verse. “Peebles was on his own orbit. The words that exploded out of his mouth were shocking, awe-inspiring. We’re lucky to have him in our midst,” said fiction writer Jawn Steighmeaus, a bystander at Peebles’ notorious “Airport Parking Garage Rant ’99.” Today, Chris Peebles is an established member of the Boise artistic elite and even has some regional fame in other parts of the Pacific Northwest. In 2005, Peebles began supplementing his successful street poetry career with a part-time job at Buenos Dias Productions as a documentary host. Peebles’ silver-tongued articulateness made him a shoe-in for the position. During the summer of 2007, Peebles began submitting material to The Kreation Korner free of charge, contributing to the site’s early success. Peebles is happy with where he has made it in life and plans to continue his endeavors with vigor and gusto. Here at The Korner, we are truly humbled to have one of our generation’s greatest talents on our team.
Website: chrispeebles.blogspot.com

Jawn Steighmeaus
Jawn Steighmeaus was born in 1982 in Schaumburg, Illinois. His mother was an executive at a major telecommunications corporation and his father a high school counselor. Jawn earned a bachelor of art in English literature at Northwestern University. In 2007, he received his MFA in creative writing from the University of Wisconsin at Madison and relocated to Boise to pursue a career in short fiction. He has been a kontributor at The Kreation Korner since 2008

Svetlana Mendoza
Little is known about Svetlana Mendoza. This kharismatic comedienne keeps much of her early life close to the bodice. What we do know is that she is a missile crisis baby--perhaps the only one. Born to a Cuban father and Russian mother, she grew up on the wrong side of Smolensk raised almost exclusively by an ex-KGB nanny who had ice water for blood. Our best guess is that she arrived in the US sometime around 3:47 pm on July 15, 1996--but that’s just a rough estimate. Legend has it that Svetlana--dreaming of better opportunities in America--smuggled herself into the country in a box of streamers belonging to Russia’s Olympic rhythmic gymnastics team. Once stateside, Mendoza began hitchhiking across this great land--after allegedly watching a few of the minor field events. From then on it was a life on the road, relying on the charity of strangers for a meal and a place to sleep. It was during this itinerate phase of Svetlana’s life that she saw her first Sinbad VHS, a revelatory experience that set her on her present career path. “The energy, the passion, the clothing,” Mendoza recalled. “It was then that I knew my calling in life.” Starting with an open mic at Knock 'Em Dead Comedy Club and Crematorium in Gastonia, NC, Svetlana cut her teeth at dive bars, laundromats and street corners from the South Atlantic Seaboard to the Great Basin. Her unorthodox, uncanny, untamed style earned her a reputation as one of the least funny traveling acts. Shows how much the kritics know! When Mendoza isn't causing her fellow kontributors to writhe around on the floor of the HQ in laughter, she is an outspoken activist against the rampant portrayal of Russians in film and television as sociopathic arms dealers. The Kreation Korner is truly lucky to have a kreationist of such kaliber on staff.

Percy Stankowski
You see a sharply-dressed young man, a dead ringer for that guy who wrote "Juno." Suddenly, he's running bits of newspaper through a 16mm projector while simultaneously lighting the machine on fire, all while projecting the great teeming mess onto the facade of a T(sar)-Mobile retail store. No, silly, that's not Mo Rocca -- it's Percy Stankowski. Percy's filmmaking expertise and reputation as a chronic envelope-pusher has made him a staple here at the Korner, and it's time we took a look at the origin of such a fascinating Kreationist. 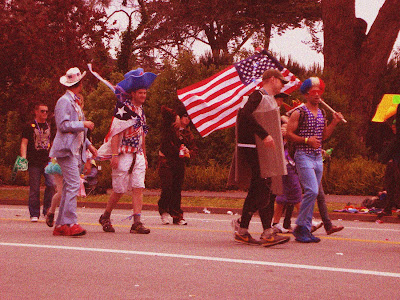 Still from "March of the Pagans," Percy Stankowski

Peter Doe
The illustrious and storied life of Peter Doe begins way back in 1960, somewhere on Route 66 near Kingman, Arizona. Ever since Doe tumbled kicking and screaming from the birth conduit onto the previously immaculate naugahyde back seat of a stolen ’58 Chevy Impala, he’s lived a life on the road—save for a short spell on a domesticated wildebeest ranch. Until the age of seven, Doe lived in the car of his birth (which came to be referred to affectionately as “Vlad the Impala”) tagging along with his parents Roy and Cookie on occaisional bank jobs across the American Southwest. During this formative period of his life, Doe was exposed to the innate skullduggery and barbarianism of man captured so vociferously in his writings today. Life as a child surrounded by petty crime and inept (though well-intentioned) wildebeest husbandry proved tumultuous for the young Doe. Matters were not made easier as Peter was forced to help raise ten younger siblings thanks to his parents’ Chamberlain-like fecundity. Though Doe does not like to talk about these tough years much, he does admit that listening to rabble-rouser K. Hume O’Henderbaum’s pirate radio station was his only solace, albeit lo-fi. In spite of his rough up-bringing, Doe’s thirst for the road was never quenched. It was this spirit of a restless traveler that led him to Vietnam at the age of 19. Although the war had been over for a number of years, Peter was still rattled to his core by a shouting match with a cab driver over misleading fare signage. He is still haunted to this day by the sounds of car horns and rattling mufflers every time he gazes as if hypnotized at a ceiling fan. After his exploits in Southeast Asia, Doe found himself stateside—grizzled, mumbling, bearded, stringy-haired and emitting a pungent, urine-like odor. This was a low point in Peter’s life, his only company being a 1975 Buick LeSabre named Judith. Fortunately, everything changed one day when Doe was in his vehicle behind a 7-Eleven waiting for the old Slurpees to be thrown out. As he listened to an actor-cum-presidential candidate very reminiscent of his idol O’Henderbaum on the radio, he looked at himself in the rear-view mirror. From the small rectangle staring back at him, Peter realized what he’d become: the very scum he’d learned to despise. Vowing never again to be a drain on society, Doe resolved to serve his country through military service. Calling the U.S. Armed Forces “a bunch of pussies,” Peter opted instead to join a paramilitary organization called the Love Children of Justice. Through most of the eighties, Doe and his brothers in arms stamped out perpetrators of acts they perceived as destructive to the moral fabric of America. In 1989, Doe and several other LCJ captains were convicted as vigilantes with numerous charges of assault, arson and public urination. Although feeling betrayed by the country he’d strove so valiantly to protect, Peter took his sentence like a man and served ten years before being released on irritating behavior. During his time in the slammer, Doe hit the books, becoming fluent in Russian and earning his veterinary degree. As a free man, Peter relocated to Boise, ID—then a mecca for Russian-speaking ex-con animal care professionals. There, Doe managed to keep his nose clean save for a short stint behind bars for hustling croquet at Dinnis Baysmund Memorial Park. Forgoing the proper lodging Boise had to offer in favor of his LeSabre, Peter literally lived on the road, keeping his wanderlust beak constantly wetted. It was during this time that Doe began channeling his incarceration-fueled animosity towards all things American into a handwritten, fortnightly opinion pamphlet distributed throughout the capital. In 2007, when The Korner was a mere startup, we took notice of Mr. Doe and extended him an invitation to write for us. He obliged, but with the cryptic condition “only if we let him do it his way.” Our relationship with Peter has not always been rosy, but we would not have it any other way. His frank, tell-it-how-it-is style keeps us honest and frequently shatters the status quo with revolutionary new perspectives. Peter Doe is a true asset to The Kreation Kause. You might say he’s the poison tip on our fast-moving mind-dart.