Well, it's that time of year again for celebrating miraculous births and enjoying a brunch of Mussels Vanderbilt with friends. During these final days of the calendar year, we can forget about the near universal garmonbozia plaguing our world and focus on the positive. Today's kartoon from Hadley Daughterson reminds us of the magic of this season and serves as a beacon of hope for the coming year. Abscond with: 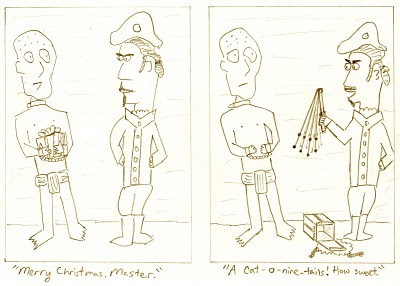 Posted by The Kreation Korner at 7:49 PM No comments:

There’s a great deal of history you should know about Kreationism. Inasmuch as that’s concerned, we put our trustworthy documentarian Gabe Gabriel up to the task of plumbing the depths of the latest academic literature on the subject and he generated this short-but-sweet research biography. Truth be known, Murdoch’s put a fire under us to kontribute more to the small-but-influential field of Kreation skolarship. It would appear kontributing to the field of Kreation itself isn’t enough. Just another way Chas likes to push our buttons. Rancor aside, we’d be nowhere without his largesse. Prepare to have your ass rubbed in the moonshine:

T. G. Kreationssen: The Man Behind The Korner
By Gabe Gabriel

Any discussion of Kreationism’s long, colorful and often mysterious history would be remiss without a detailed look at the movement’s founder, Kolonel Thor Gustav Kreationssen. Born in 1785 to a prominent forest products family in Piteå, Sweden, Kreationssen was drawn at an early age to such activities as bookbinding, playing the nyckelharpa and reciting improvised sonnets in the public square. This outlandish behavior quickly raised more than a few eyebrows around the small nordic town, resulting in his father’s decision to send the young Kreationssen to a now defunct military academy for boys on the Baltic island of Gotland (Kinnedy, 345).
Despite harsh conditions, poor sanitation and under-fermented Surströmming, Kreationssen's gumption persevered and quickly won the hearts and minds of his peers and eventually the commandant, a prickly fellow called Mr. Anckarström (Gomez-Thackeray, 214). It is a debate amongst scholars whether this was the first known instance in recorded history of minds being blown en mass. Kreationssen and his brothers in arms soon became restless in their insular confines and departed Gotland in 1806 for mainland Europe (Kinnedy, 353-354).
Although only carrying the rank of Sixth Lieutenant, Kreationssen was the de facto leader of his ragtag battalion and dauntlessly pledged his and the support of his men in the fight against the tyranny of Napoleon Bonaparte. Rather than lethal weapons however, the intrepid young Swede chose bayonets of broad-mindedness to impale ignorance rather than flesh (Thomason, 414). Kreationssen and his kompatriots arrived several days after the decisive French victory at the Battle of Jena, however, and found themselves dismayed and penniless in occupied Prussia.
But this didn’t crush the spirits of the ever forward-looking Kreationssen. It didn’t take long for word to spread amongst the Prussian peasantry and other classes that a strange man of mental-might hitherto unknown was in their midst, demolishing long-held conventions daily. The legend--and the man himself--of Thor Gustav Kreationssen gave hope to those looking for meaning in the wake of devastation (Kinnedy, 378). For the next ten years, Kreationssen and his followers--who quickly became known as Kreationists appropriately enough--walked from one end of Europe to the other, lifting thousands from mental incarceration through spontaneous acts of poetry, sound, street theatre and visual art.
In 1816, Kreationssen’s father passed away and bequeathed his vast timber products fortune to his sole progeny. The former Sixth Lieutenant--now 31 years of age--settled in Paris and quickly became the talk of the salon scene. Theories of why Kreationssen chose Paris very, but a prevailing one is that he wished to take down the beast of what he considered feebleminded intellectual movements by cutting off the head (Thomason, 422). It was during this time that he published the Kreationsim Manifesto, which firmly outlined his goal to blow the mind, body and soul--a core tenant of the Kreation movement to this day. No publisher in Paris would touch this scandalous tract, so the author was forced to publish it back in Piteå on one of the family-owned printing presses (Kinnedy, 412).
After the Manifesto’s release, Kreationssen earned the dubious distinction of Western Europe’s “bad boy,” hobnobbing with the cultural elite--and their wives (Kinnedy, 415)! This Casanovian lifestyle was soon cut short as some great personal tragedy befell Kreationssen. Shunning all forms of interpersonal interaction,--save for weekly visits from friend and konfidant Johawn von Steimaus, chairman of Kreationism's Alsace chapter--he never again kreated in his life and the jury is still out on why. Spekulation suggests it was the death of a secret lover or some great revelation us lesser are not privy to. Perhaps we will never know. Perhaps we are not meant to know. Noted Kreationism skolar Daniel A. Thomason suggests that Kreationssen during this period of vulnerability came under the influence of the Bricklayers, the Order of Strangefolk or some other sinister secret society (427). Evidence of such contact is spotty, but what is universally agreed upon by scholars is that Kreationism's founder was never the same.
Before succumbing to unknown causes in 1842, Thor Gustav Kreationssen lived out the rest of his life as a hermit at an abandoned sawmill near his birthplace. He left his fortune to a distant cousin, who happened to be an ancestor of Chas Murdoch. Though he receded into obscurity and may well have been manipulated by subversive elements, his spirit is carried on by Kreationists the world over who revere him posthumously as a Kolonel in the Kreation Kause (Thomason, 435). Although the mysterious circumstances surrounding the latter years of his life will likely remain as such, what is no mystery is his legacy. A legacy that assumes the form in this day and age as an undaunted commitment to being a beacon of hope, love and true cranial clarity in an otherwise cruel, indifferent world.

The old "Donkey in a Top Hat" bit as told by Svetlana Mendoza, Part XI:

Any concerns the foreman had of appearing remiss in his duties were dismissed as he and his equine companion arrived back at the rendering plant
It appeared a labor dispute had fomented in their absence and a seething picket line now obstructed the facility’s entrance
The donkey was taken aback, but the foreman had seen this storm a-brewing for several months

To Be Kontinued...
Posted by The Kreation Korner at 9:52 AM No comments:

Necessity Is the Mother of Kreation

The title of today's post is taken straight from the horse's mouth. But I bet this is the first horse you've ever seen throwing the paint of kreation indiscriminately against the canvas of the urban environment! That's right, we're here today to present an exclusive interview with our very own street kreationist, BLENKO. We could give a lengthy introduction to what is surely a breakthrough moment in the chronicling of human artistic expression -- but we think the guy can speak just as well for himself. ¡Mira!

Posted by The Kreation Korner at 7:56 PM No comments:

The contents of my
digestive tract ejected
onto the tabletop.
Like a bilious fire hose
of ignoble design.
My innards feel scooped
out and my ribs a bit
tender. I'm only human
after all--but isn't that
just a copout used to
forgo perseverance?
I welcome suffering as
an opportunity for
personal examination
and moral clarity.

--Dr. Peebles
Posted by The Kreation Korner at 9:53 AM No comments:

Even in death, Mitt remained calm and collected. Stoic even. It was never his way to panic or to blame people. Were I him I’d’ve blamed my wife, my folks, my teachers--anybody to take the heat. But Mitt, always the wise half of the duo, knew excuses were like pancreases. Pancreases riddled with buck shot and hemorrhaging that precious life-giving liquid known as blood. Blood that spilled onto the artichokes, those spiny green treasures he’d fought so hard to obtain. Obtained in that fertile coastal plain--once a playground, now a sun-drenched tomb.
I tried my best to apply pressure to the wounds, but any effort to stop the bleeding was in vain. For a split second I even considered saying something to effect of, “sorry, Mitt. My efforts to stop your bleeding are in vein.” Mitt didn’t appreciate puns even when he wasn’t about to meet his maker, so I spared him. We just sat there, listening to the rapidly approaching baying of Sylvain’s Rottweilers.
Why had Sylvain double-crossed us? I ran through the last two months in my head, but couldn’t recall insulting his honor at any point. But he’d ambushed us just the same, and as we sat holed-up in that tool shed, I was baffled at how an innocent everyday agri-heist had gone so awry. All Mitt and I wanted  was to sate our love of both artichokes and stealing things. Plus pre-harvest ‘chokes fetched a pretty penny on the black market. But it was never about the money. We almost always broke even.
But there we were. In over our heads. In a way, I envied Mitt. He could die doing what he loved. Who knew what type of grisly, undignified end Sylvain and his men had in store for me? My train of thought was suddenly derailed by a loud raspy moan. I was quick to comfort Mitt, cradling his soil-flecked head in my arms.
“I don’t think I have much longer,” he said.
“It’s ok, pal. You’ll be marinating the big artichoke heart in the sky soon,” I replied.
“Hehe. Don’t know about that old friend,” he gasped. “I lived a life of stealin’ and fightin’ and drinkin’. I’ll be lucky to end up in hell!”
“From what I hear, hell’s a big vat of drawn butter.”
Mitt managed a weak smile, eyes glassy. The dogs were closing in. I could hear the shouts of men as well. Mitt was dead. But his demise would not be in vein. I took up his lucky artichoke bat, and poised myself for combat. I'd be joining my partner soon, but not without a fight.
--Jawn Steighmeaus

Posted by The Kreation Korner at 1:55 AM No comments: