No. 1: "When life gives you artichokes, make artichokade."
No. 2: "Don't judge a book by its cover. And for that matter, don't judge a book by its jacket--some trickster may have put an erroneous jacket on the book so as to mislead you. This is some sick people's idea of fun."
Posted by The Kreation Korner at 3:50 PM No comments:

Greetings Kreationists! We here at The Korner hope you're enjoying the sun--preferably with the proper application of sun block (we recommend SPF 15 or higher). We know what you're thinking: what would be the most refreshing and yet nourishing beverage on a scorcher like today? Well, we'll tell you: a tall, cool glass of Chris Peebles, of course! With his latest poem--"Feigning Sympathy"--our man once again proves he walks to the beat of his own tambourine player. Metabolize:

Remember that time
your pet animal got
asparagus blight?
I said "sorry, I know
how you feel."

Well, guess what.
I didn't actually
know.
I was only pretending
to care, so joke's
on you.

And that time a
criminal bludgeoned
you with a bag of
guns--I only visited
you in the hospital
'cause I was there
anyways for a skull
transplant and wanted
to see if you had any
cool scars.

All this time you
thought I was one of
the fourteen nicest
people you knew.
But I'm not. I don't
give a rip about you
or your pet. What is it
like being such a
sucker?
Posted by The Kreation Korner at 9:42 PM No comments:

He was just pushing for the weekend. Just pushing produce. Pushing crackers. Pushing Kombucha-brand iced tea. $3.69 for a bottle, get in line. Don't look at the clock, get in line. Face those cookies, get in line. $13.88, sir. Credit or debit, sir. The minutes ooze by like the Jell-O chocolate pudding from a punctured single-serving cup. Gotta clean up that mess. Push it behind those other pudding cups. Push it. Get in line.
-Anon.
Posted by The Kreation Korner at 12:35 PM No comments:

This week, The Korner is pleased to bring you the latest from the hilarious jokeman Dugg Focks. In this cycle, Focks flexes his blue humor nuts. Due to the salty nature of his witticisms, we have omitted any potentially objectionable words. Although we at The Korner don't tend to shy away from colorful language--no matter how offensive in or out of context--even we have a limit. But don't worry, these jokes are just as funny without the potty mouth. You won't even notice it's missing. Savour:

Joke: How many [censored]?
Punchline: Twelve.

Today we bring you another bit of visual one-dimensional pen-and-ink storytelling from Lee Watt. Although a departure from previous content in its deft wielding of the komedic sword, it is a sword nonetheless and one that is capable of piercing you to the core. Just remember that you too may one day be just another sizzling egg in the frying pan of life. Check this shit out: 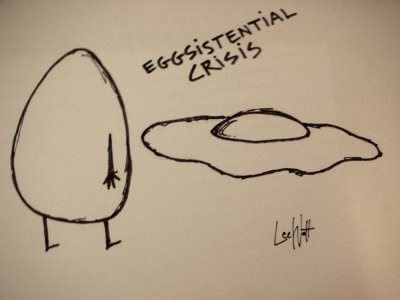 Posted by The Kreation Korner at 11:48 AM No comments: