In an effort to lighten the nation's mood, Richard Bruce Cheney, affectionately called "Dick" by his compatriots, has embraced a more youthful image as of late. Some analysts say that this newly adopted, Hilton-esque attitude is meant to strengthen the ties between the general public and the higher-ups of national government. The US government has been calling on such beacons of public trust as the Kreation Korner and others to disseminate the message in the hopes that the nation might be brought closer together. We here at the Korner are always more than happy to wield our might for the greater good, and it is thus with great pleasure that we bring you this message: 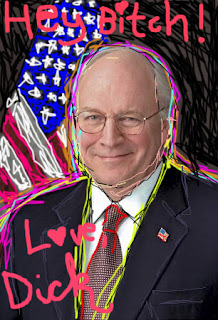 Posted by The Kreation Korner at 11:07 AM