There are a lot of things I don't understand about America. For example, why do we as a society revere cowboys so much? What is so appealing about these rugged cattle-rustlers of yore? I'll tell you what's so appealing: nothing! Cowboys were ill-mannered, carousing ruffians. Their meals consisted entirely of undercooked red meat and potatoes, which were washed down with whiskey. Warm whiskey. Once adequately intoxicated by their rotgut spirits and sub-standard dietary choices, these unruly yahoos would proceed to engage in unsavory acts with women of ill repute. On top of all that, cowboys rarely bathed. The life of a cowboy on the frontier can be best described as a constant torrent of vile-smelling drunken revelry. The cowboy's animal-like demeanor can be further seen in his most uncivilized mode of conflict resolution. Rather than fixing conflicts like any self-respecting human would, the cowboy unhesitantly resorted to six-shooters. How, by any measure, can we look at these barbarians as heroes? We should deride them as a blemish on our proud history as Americans, not present them as role models to our children. Something is seriously wrong with our nation. We purport to accept values of hard work, temperance and self-restraint yet we idolize and devote entire cinematic genres to rowdy, immoral degenerates. We shouldn't look at the John Waynes and the Clint Eastwoods as great actors; we should look at them as great frauds. Frauds who only prolong America's perversely misguided interpretations of historical fact. --Peter Doe 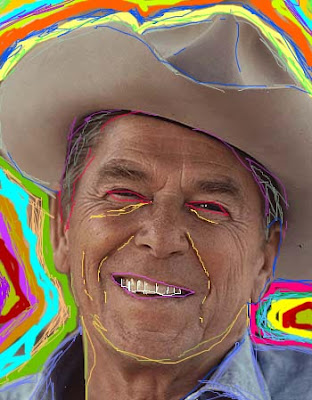 original art by Joe Mama
Posted by The Kreation Korner at 8:13 PM