Today we introduce to our ranks a learned woman whose nom de plume reads simply "GRECH", a reference to the artist's first name. While GRECH's poetry echoes the sentiments of such Transcendental greats as Thoreau and Emerson, both her pseudonym and chosen medium draw inspiration instead from the streetwise art movement known as graffiti, or "tagging." Her works can be found adorning the various highways of America, applied directly to the roads. The striking contrast between GRECH's words and their manmade and impermanent context really does make one think. This latest piece was discovered on I-76 just outside Akron, OH, and is one of her strongest so far.

Sitting upon the grass
I feel not the least bit crass,
For I am within the eyes
Of the greater ruler of the wise.
When I am basking in the glory
Of such perfect territory
I feel as if I can meld
With the world which he held.
Sitting upon the ground
I feel so part of the mound,
My livelihood is complete
And nothing I cannot defeat. 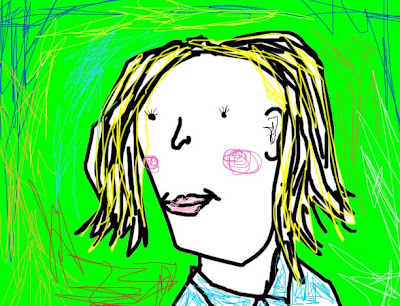 *Professional artist's rendition
Posted by The Kreation Korner at 1:06 PM