Hiya, Kornheads. Your faithful Kreation Korner staff returned this morning from a much-needed retreat in South Beach to unplug and recharge. That may be a paradox but it worked--one of those mysteries of life we guess. Anyways, only moments after we'd shuffled our mentally, emotionally, and physically refreshed selves into the HQ and reconnected to the interworld, we were shocked (on the inside, but remained serene on the outside) that Gabe Gabriel II, whom we'd left behind to helm the Korner in our stead, had deleted precious kontent which had been posted by Hadley Daughterson just before we exited our offices en masse to board a chartered omnibus for SoBea. The younger Gabe's reasoning behind this kardinal infraction was that the post purported to be satire, which as he dubiously indicates is impossible in a "post-satire age." Many of us saw the kontent in kwestion before our departure and can assure you that it was very satirical indeed. It was a piece of graphic art konsisting of three panels, each a mock periodical-style advertisement for a politician, the konceit being that, in late kapitalism, democracy is a farce and the elected official is just another silly product for us to konsume. We felt this kontent was sufficiently satirical and we will not subscribe to Gabriel II's rather bleak and defeatist worldview that satire is dead. We must kontinue to act as a check on would-be tyrants. If we were to simply give up, we would be komplicit in the normalization of their chikanery. To hop down from the soapbox for a moment, let us not forget who was really hurt in all this--Hadley Daughterson, who was so incensed by this unfortunate affair that she, in protest, released a potent hacking tool created by our own government into the kloud, expunging any and all rekoverable ghosts of the removed work. Sadly, her inspired (and inspiring) triptych will never again be beheld by human eyes, or those of any species. Although rekompense in this matter is impossible as all acts of kreation are irreplaceable, we have authorized Hadley to jump to the front of the production queue and publish two (instead of the usual allotment of one) new komiks. We know it's only modest succor but hope it will serve as a salve for everyone affected during this hopefully short-lived dark chapter for Kreationism. In the meantime, we've sent young Gabe to South Beach for an intensive three-day refresher kourse on our standards and practices. Take and eat: 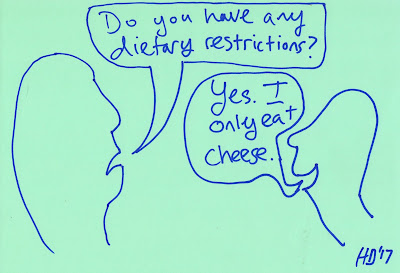 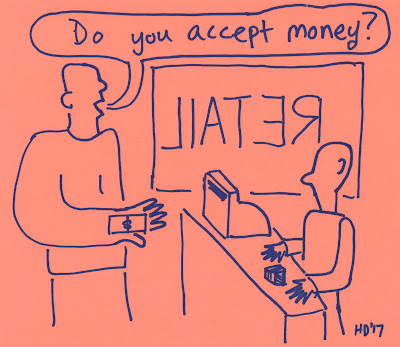 Posted by The Kreation Korner at 8:35 PM