This week at The Korner, we’re turning over a new leaf. After we awoke from our fortnight-long celebratory stupor, we realized things have gotten a little stale around here. But that’s no reason to point fingers *cough* maljohn *cough*. After all, when life gives you stale bread, make croutons—or in our case, explore a new genre. In a serendipitous and all too typical stroke of Kreation kismet, the inspiration for such a genre entered our lives recently and was deftly captured in this high-resolution snapshot: 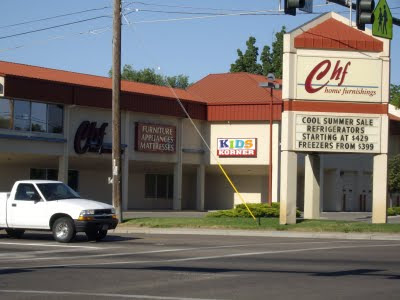 A group of us were carpooling back to the HQ after an advance screening of Juno 2: Labor Party when we drove past this auspicious peddler of sleeper sofas, ottomans, and the like. It hit us all like a ton of propeller beanies. Kids are the future. Plus, there are thousands, if not millions of them on this planet alone. Why, then, had we neglected to cater to this demographic in the past? As we all had just seen from the tragicomic plight of the teen protagonist in the film, it’s not all malt shops and prom committees for youngsters today. They have real problems, making them worthy recipients for the rejuvenating and liberating effects of Kreationism. Grabbing this opportunity by the beak, we’ve commissioned our own Jawn Steighmeaus to produce some work custom tailored to the needs and interests of today’s youth. Like most of us at The Korner, Jawn has his finger on the pulse so his words will resonate in a big way with tots, tweens and teens. Let’s rock:

They sat and stared. Like the staring contests of times now only particles of a memory, dangling tenuously on the horizon of dream—but this time not for keeps. In their salad days they’d play for bubble gum, poster putty, power tools—whatever they could get their sticky paws on.
But then the precipitation swept through, and actually wiped corruption and decadence off the streets. Swift. Uncompromising. No quarter for the wicked.
After that, the old friends could man their respective seated positions, unfettered by unsavory thoughts and urges. One would sip Drambuie rocks, the other: tap water. With a new lease both on life and their third-storey walkup artist’s loft, the pair were content to exchange 17-foot stares, piercing each other’s retinas for minutes at a time.
“Look who’s laughing now, world,” the valiant warriors would guffaw as they reclined to saw logs after an arduous day of ocular combat. They had elbow room now. They’d climbed out of the quick sand pit of crazy tail and warm booze and carved out their own piece of Valhalla.
Now they could die happy as the broken factories rhythmically belched out uniform black plumes, like clockwork in the wasteland.
Posted by The Kreation Korner at 4:29 PM