Greetings, Kornies! Hadley Daughterson here, and I'm writing today to tell yinz of a spectacular experience I had the other day at BTS (Boise Towne Square mall). I use "spectacular" to mean "of or resembling a spectacle" as furnished by thefreedictionary.com. I observed a preponderance of shop windows prominently displaying apparel emblazoned with what can only be described as commodified street art. As I gazed upon mannequin after mannequin adorned with wryly sardonic send-ups of older-sibling propaganda, it okkurred to me that the ultimate kommentary on coercive authoritarian power structures is to participate in the uniformity they foist upon mall-goers the world over. Seeing these products rekindled in me the antiestablishment zeal I felt in my salad days as a guerilla posterhanger in Latrobe. In light of this nostalgia, I have elected to throw my headwear into the kommercial ring. Rather than the distressed surfaces of urban America, the distressed fashion tee will be my kanvas. For my first prototype, I dug up one of my old designs from the late 80s and dusted off the screen printer. Chris Peebles agreed to model the inaugural garment, but only under the kondition I obskure his face in any publicity stills: 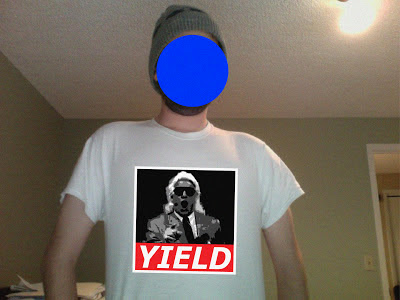 Posted by The Kreation Korner at 8:36 PM