It's no surprise that we're hearing of more Chas Murdoch antics. What is surprising is how long we went without any. Late yesterday, an anonymous source close to Murdoch leaked the following two images--the first, what appears to be a logotype for the newly-formed Murdoch Organization real estate development corporation and the second, an apparent mock-up advertisement for the potentially reactivated Boise Bench neighborhood redevelopment: 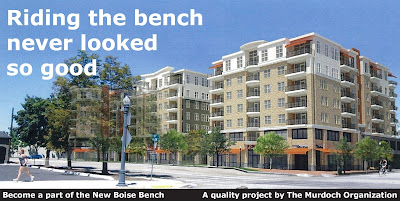 Though no additional information was provided, the implications of these JPEGs are alarming. Regarding the first, what is meant by the slogan "Just Business"? For us, it evokes the worst sort of cut-throat commercial practices and the inevitable injury they inflict upon people and community. Or is "just" of or relating to justice, a concept contradicted when juxtaposed with business, a system perpetuated by inequality and exploitation--unless the use of "business" refers herein merely to unspecified matters with which an entity is principally concerned? The ambiguity here, given Murdoch's history, is unsettling to say the least. And what of the "New Boise Bench" marketing layout complete with eye-roll-inducing tagline? Is this Murdoch's vision for The Bench? A sterile, predictable, tedious urban paradise that will likely exclude (financially AND culturally) current Bench-dwellers for his personal gain? Is this his idea of "giving Boise back to the people"? Or is it "Just Business"? These are the types of questions we wish the media were asking. Unfortunately, virtually all of their reporting and analysis seems to be devoted to decoding the following tweet Murdoch just happened to fire off within hours of the leak: 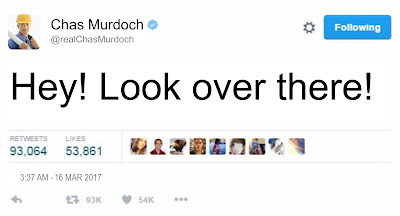 We find all of this nonsense very exhausting. But perhaps a ray of hope is that many obstacles--political, financial, administrative, and otherwise--lie in his path and Murdoch may be unable to deliver on his promises. We're not holding our breath though. We'll keep you posted.
Posted by The Kreation Korner at 8:43 PM