Well, after eight grueling days KreationKon has finally drawn to a close. We'd like to say it went off without a hitch but there were in reality several. Our foremost misstep was giving Gabe Gabriel II The Bookmaker karte blanche over organizing the event. Although his aspirations of pursuing professional konvention planning are admirable, the fact is ten years isn't near enough life experience to grasp the nuances of such a specific and herculean task. He made the usual amateurish mistakes, such as reserving the cramped 1,040 sf Selway Room instead of the spacious 4,689 sf Bonneville Room. He also rented four fog machines too many, making flash photography and seeing in general difficult if not impossible in most cases. Furthermore, the younger Gabriel hired Reputable Commercial Printing and Scuba Gear Repair--an outfit blacklisted by The Korner, mind you--to produce kommemorative merchandise for KreationKon. Turns out an ambitious screen printer in their ranks took the liberty of "spell-checking" a trademark affectation of ours, which has proved a subject of konfusion and ire amongst readers and kontributors alike. In spite of these mishaps, though, the event was a success. We recorded record attendance, giving away all but three koozies. Those who were lucky enough to navigate the haze were able to interact with the Kreation Krew in a kandid and meaningful way. As for Gabe II, we're ultimately grateful he was able to learn some important lessons and tricks of the trade through this trial by fire. We'd like to extend our gratitude to the good people at Tsar Mart who katered the event as well as the Red Lion staff. They were always on hand with a friendly demeanor and a can of D-Vour. We're still not quite sure why we aren't welcome back next year, however. 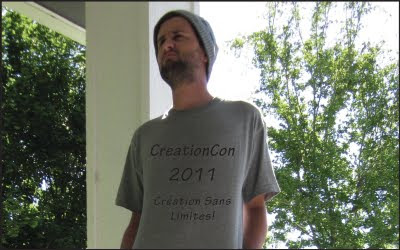 Chris Peebles reluctantly models a T-Shirt from the konvention. We had no choice but to sell these and other erroneously worded memorabilia for half-price.
Posted by The Kreation Korner at 9:20 AM